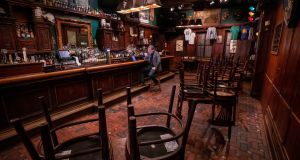 Gavin Coleman, owner of the The Dubliner Restaurant & Pub in Washington DC, in his empty bar on St Patrick’s Day. The popular pub near Capitol Hill would normally be crowded with celebrating patrons from early morning onwards. Photograph: Erik S Lesser/EPA

We’re all seeing them, on our phones and tablets, on the laptop. These messages are not just pub chats, they are broadcasts or publications to maybe thousands of people, especially with sharing and retweets. And that’s the problem.

The onset of Covid-19 and all the measures being taken to contain it are delicious fodder for the excitable fabulists who live online, always looking for the latest shock or joke.

This constituency is not aware of double-checking facts. Don’t let the facts spoil a good story! That used to be a joke in newsrooms, but for ethical journalists (and believe me, there are plenty, especially in publications such as the one you are reading now) it was only a joke, and the staff were professionally dedicated to finding as much accuracy as possible in the defined time before publication.

In recent years I’ve taught media practice and ethics and one of the prime examples of fake news we discuss is the 2016 “Pope endorses Donald Trump for US presidency” fable.

Of course, the Pope never did, and the original story claiming so was on a website that carried a disclaimer that its material was largely satirical – but at the foot of the page.

As we could tell you even back in the days of print-only, few people make it to the end of every story. In the online world, figures show that many, many people only read a headline before tweeting and sharing it. They’re looking for the quick thrill, not the dreary painstaking search for facts.

I am urging everyone to please stop sharing unverified info on What's app groups. These messages are scaring and confusing people and causing real damage. Please get your info from official, trusted sources. Follow @HSELive @hpscireland @WHO @merrionstreet @dfatravelwise

This is the annoying but dangerous reality facing our leaders, one described by Tánaiste Simon Coveney when he told the public to ignore rumours on social media. A crash course in critical thinking might be a valuable way to spend some of the free time imposed on us by Covid-19.

Do they still teach media literacy in schools? I’m not sure if the former practice of giving kids a grounding in reading sceptically has survived the age of the internet.

In the midst of a worldwide pandemic panic, what is sorely needed is scepticism about some of the stuff that is circulating with immediacy and idiocy on social media. Don’t take ibuprofen! Country in lockdown from midnight! This is the worst flu you’ll ever get even if you survive!

And so much of the disinformation in CAPITALS. That is one of the warning signs. If the message on your screen needs CAPITALS then it is hysterical and should be treated with caution.

The unfortunate truth is that people have not learnt to behave with maturity and restraint – as they might IRL, In Real Life –- when under the “disinhibition effect” of remote communication.

It is little short of tragic that professional newsgathering has been so often replaced by legions of bloggers, tweeters and impulsive button-pushers

Years ago I worked as a sub-editor for the BBC World Service. For every story broadcast, there had to be multiple sources. Apart from staff correspondents, who were presumed to be reliable, every story had to emanate from three reputable providers, such as the Reuters news agency or Agence France Press.

The three could be boiled down to two for a fast-moving story, as long as one of the two was not one of the lesser agencies (I won’t name which ones) who did not have the same solid reputation for veracity. But they were still professional newsgatherers.

It is little short of tragic that professional newsgathering has been so often replaced by legions of bloggers, tweeters and impulsive button-pushers who have not been taught to think of the consequences.

Fast-forward to 2020 (and recent years) when a hasty Tweet or WhatsApp can spin around the world and even end up on the digital front page of highly reputable newspapers.

That WhatsApp that was forwarded to you might appear to come from a medical clinic, but does it actually exist?

This happened recently with the “scare” about using ibuprofen as a relief from Covid-19 symptoms. Some words from a French government minister were twisted, then repackaged as coming from various reputable health sources and spun across the internet with a frightening velocity. Likewise the rumour, firmly debunked by the Tánaiste, that a total “lockdown” of the country would commence on March 19th.

Other countries have had similar scares courtesy of ignorance and impetuosity. Everyone has to be sceptical of the news they see on their phone or laptop, and not just around this unprecedented crisis. This is the negative side of the internet, which has enabled wonderful sharing of knowledge, but also much rubbish and cruelty.

Check, check and check again. That WhatsApp that was forwarded to you might appear to come from a medical clinic, but does it actually exist? Is that really a HSE site?

Go to the supposed source, listen to reputable radio, subscribe to good newspapers like The Irish Times in Ireland, The New York Times, the Sydney Morning Herald in Australia. Don’t believe your phone.

To paraphrase another old reporters’ saying, if your mother sends you a WhatsApp saying she loves you, check it out – did it really come from your mother’s account?