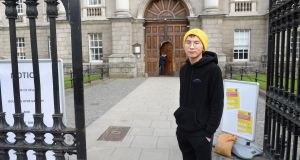 The decision was taken in order to prevent the spread of coronavirus among students living in close-quartered accommodation.

Late on Monday night students received an email informing them that on-campus housing, Trinity Halls in Rathmines, and private student accommodation partnered with Trinity must be vacated by 8pm the next day.

International students were given 48 hours to pack their belongings and leave the accommodation by Wednesday.

The university said it would make exceptions if a student was at risk of homelessness, faced visa or travel restrictions, or if a member of their family at home had the virus. It later clarified these would include students who had immunocompromised family members.

Aaron Koay (24) is an international student from Malaysia in his final year of pharmacy, who lives on the Trinity city centre campus.

“Essentially, we were told to pack away our life, book our flights and fly home, all under 48 hours,” he told The Irish Times.

“Some students and their families just simply do not have the financial abilities to pay for the flights under such short notice, especially those from non-EU countries,” he said.

Mr Koay is currently working on placement as part of his course and if he is forced to return to Malaysia would have to defer finishing his degree, he said.

“International travelling at this moment is a risky move . . . the last thing I want to do is to unwillingly perpetuate the disease,” he said.

There have been eight confirmed cases of coronavirus in Trinity, however internal correspondence shows none of those are student residents.

Trinity confirmed students in college-owned housing would receive refunds on rent, but that it could only “support” students seeking refunds from private student housing providers it partners with, Kavanagh Court and Binary Hub.

Lorna Fitzpatrick, president of the Union of Students in Ireland (USI) said the lack of discussion with students prior to the decision was “extremely concerning”.

Elizabeth Younger (22) is a history student living on the Trinity campus, and described the decision to close the accommodation as “egregious.”

Previously Trinity advised students to temporarily return home following the two-week closure of colleges. Ms Younger returned to Southampton but left the majority of her belongings in her flat, expecting to return in a short number of weeks.

When she received the notice the college was closing its accommodation she booked a flight back to Dublin on Tuesday to pick up her things, with the two trips costing her £180.

“I question whether this decision is actually legal, even with the rent refunds, as college accommodation is now covered by the Residential Tenancies Board,” she said.

“I live in a flat with three people, and obviously I would see my flatmates but not many other people in the accommodation,” she said, adding the conditions were no different to apartment blocks across Dublin city centre.

Niamh Ní Hoireabhaird (23) is a third-year history student and a wheelchair user living on the campus front square.

Her family would have to make two car trips on Tuesday from Kildare, as their car will not fit her suitcases and wheelchair, she said.

The university should “absolutely” have flagged the possibility accommodation would be closed earlier, and “the most difficult part is the fact it’s 24 hours notice,” she said.

On Tuesday, Trinity Provost Prof Patrick Prendergast said “no student will have to leave who has no other accommodation,” and the deadline to vacate rooms could be extended for students who needed to book overseas flights to return home.