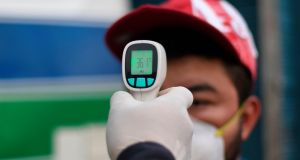 A transit police officer checks the temperature of a truck driver during a partial curfew ordered by the government in Villa Nueva, Guatemala. Photograph: Johan Ordonez / AFP

The coronavirus pandemic has already upended our world, breaking laws we thought were immutable and exposing the unsettling fragility of a way of life we took for granted. One of those iron laws, for at least a generation, has been ever-greater connectedness: the idea that people and goods were becoming inexorably more mobile, distances shorter, the world smaller than ever before. Now, with a large part of the world’s population living under some form of lockdown or quarantine, the global economy having gone to sleep, air travel and tourism stalled and governments rushing to shut their people off from the rest of the world, it’s not hard to conclude that this era of globalisation could be in retreat.

In a world of easy mobility, it was possible for the first case to reach California just a day after China confirmed that Covid-19 could pass from human to human

These connections enabled the rapid spread of Covid-19. Wuhan, the Chinese mega-city where the virus was first reported last December, is a major economic hub, home to companies such as General Motors, Honda and Renault, with extensive air connections that enable 3,500 people to fly out of its airports to foreign destinations every day.

One hypothesis that explains the severity of the outbreak in northern Italy is that that region, Italy’s economic powerhouse, has heavy traffic in people and goods with China. Mass tourism also played a role, whether through the Diamond Princess cruise ship outbreak, the clusters in Veneto or the Oise department in France (close to Charles de Gaulle airport) or the epidemic in the Iranian city of Qom, a pilgrimage site for Shia Muslims. In a world of easy mobility, where migrants move constantly back and forth, it was possible for the first case to reach California just a day after the Chinese authorities confirmed, in mid-January, that Covid-19 could pass from human to human.

The global scramble to contain the pandemic has done what nationalists and other critics of globalisation always wanted and brought much of this traffic to a shuddering halt. States are unilaterally closing their borders or imposing export bans. The Trump administration has tried to win exclusive rights to German vaccine research without consulting Berlin, while the US commerce secretary Wilbur Ross remarked cheerfully that the crisis would “help accelerate the return of jobs to north America”. Yet while much of the focus has been on authoritarian leaders such as Donald Trump and Viktor Orban of Hungary, who have always seen international politics and economics as a zero-sum game, the greater danger is that, with governments and populations spooked by seeing their reliance on others, a wider drift sets in and the collapse in global cooperation caused by the Covid-19 crisis outlives the present emergency.

At a time when states are turning in on themselves, the best example of truly global thinking has come from another international network – the scientific community

While the erection of borders and barriers may be a necessary short-term step to halt the advance of a deadly respiratory disease, the crisis has actually underlined the value of global collaboration. Covid-19 does not recognise borders; nor can the effort to fight it. Whether it’s the production of PPE equipment and life-saving medical devices or research into treatments, the crisis is an argument for closer cooperation, lower barriers between partners and stronger international structures. The World Health Organisation has been starved of funding for years, yet, for all its shortcomings, it has played a vital role in coordinating the global response, gathering data, publicising research and other tools and urging states to adopt more aggressive public health policies.

At a time when states are turning in on themselves, the best example of truly global thinking has come from another international network – the scientific community – which has done remarkable work at record speed to understand this new virus and to try to come up with the vaccine that will eventually bring the horror to an end. In other words, the crisis is rehabilitating the idea of a global community, not undermining it.

The need for cross-border coordination will become clearer as the crisis develops. That’s because, as the WHO has pointed out, the effort to suppress Covid-19 will ultimately only be a strong as its weakest link. Restrictions such as those we are living under cannot continue indefinitely. When they are eventually lifted, the danger of further waves of infection will remain for as long as those states least equipped to handle an outbreak are left to their own devices.

As far back as the Black Death, epidemics have accelerated the decline of fragile states, empires and systems. Globalisation has been under sustained assault for at least 10 years, and it looks vulnerable. But what the crisis should expose, then finish off, is the illusion that states are better off going it alone.