Cliff Taylor: We are heading into a maze of Brexit uncertainty and risk 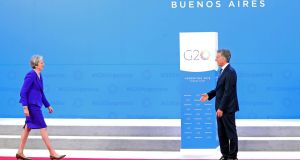 Britain’s prime minister Theresa May is welcomed by Argentina’s president Mauricio Macri as she arrives for the G20 leaders summit in Buenos Aires: Brexit debate is still based on a lack of reality about what might be available. Photograph: Marcos Brindicci

Little more than a week away from the House of Commons vote on Brexit and UK politics remains brutally divided – or more accurately splintered. It’s not so much a question of for and against the deal on offer – though of course that it what the vote is about. What is striking is that a whole range of possibilities are, in the minds of the UK’s politicians anyway, still in play. Four months from Brexit and British politics still can’t agree a way forward.

With time now very short and the EU having gone further than was expected to try to get a withdrawal agreement tied up, this is a very dangerous game. Failing to finalise the withdrawal agrement would leave a gap which might not be filled in time. Falling into a costly no-deal Brexit – the price of which the Bank of England laid on the line this week – remains a serious risk.

The range of opinion verges from the hardcore Brexiteers happy to march out with no deal at one end to those supporting a second Brexit referendum at the other. In between is a debate which still is based, in part, on a lack of reality about what might be available. The problem now is that the range of views is so wide that if Theresa May’s deal is voted down, nobody will have the slightest idea what to do next. The House of Commons is unlikely to support a “no-deal” exit proposal, but goodness knows what plan a majority might actually sign up to.

There is still an outside chance May will turn the tide, of course, and get the withdrawal agreement across the line. Some speculate that a narrow loss might even raise the prospect of a second vote in January, with a no-deal exit then looming closer, though it is hard to see the EU agreeing to much by way of change to what is already on offer.

Beyond that, your guess is as good as mine. There could be a new Conservative leader, a general election, a second referendum. Take your pick. As a way forward, some Conservative MPs are proposing that the UK abandon its opposition to continued membership of the EU single market and opt for a deal similar to Norway, which is in what is called the European Economic Area, a group also including all EU members as well as Iceland and Liechtenstein.

But this would mean signing up for free movement of people – a central component of the single market. For this reason, May again ruled it out as an option on Friday. If Brexit is to mean anything, it seems, it is the power to stop doctors, nurses, bankers, tech experts and other talented people from France, Germany, Spain, Poland and so on coming unchecked to live in the UK. And British people freely going to live and work in the EU. You can make your own mind up on how socially divisive this is – hugely in my view – but there is no argument that it will come at a huge economic cost.

Here again there is unreality in the debate – not least a suggestion that EEA membership might be some kind of temporary solution until something better comes along. There is also talk that the UK could exercise control on migration as an EEA member, based on the fact that Norway and other members of the EEA do have the option of exercising an “emergency brake” on immigration which they can use “if serious economic, societal or environmental difficulties of a sectoral or regional nature liable to persist are arising”.

However, the rules say this can only be used when strictly necessary and, of the EEA members, only tiny Liechtenstein – which feared it could be swamped – has used it. This is a world away from the control on immigration which Theresa May has said was central to the Brexit vote.Staying in the single market means abandoning this and accepting that the future relationship with the EU will be close, including on migration. As Oxford economic professor and Irishman Kevin O’Rourke tweeted during the week: “There is no more time for people in Britain to kid themselves . . . If this is the way the UK wants to go, brilliant: but they have to really go for it.”

The trouble, of course, is that the Norway option is likely to split opinion in the House of Commons just like all other possible solutions. The Jacob Rees-Mogg mob would go bonkers .Other MPs want to find a way to get out of the Irish Border backstop. Opinion polls suggest that the public are also divided.

The worrying thing is that no one may know where to go next if the vote is lost – and particularly if it is lost heavily. Theresa May may head to Brussels for the December EU summit just after the vote, looking for some, undefined “better deal for Britain”. Unless they are pretty sure she could deliver second time around, the other EU leaders are unlikely to rush to help. If the vote is lost, there is simply no clear way out of the resulting maze.

And so we would be left with everyone wanting to avoid a damaging no-deal exit, but nobody sure how to do it. Who knows whether the Bank of England scenario of a sudden hit to the UK economy and a big drop in sterling after a disruptive Brexit would be what would happen. What was new about its figures was the speed at which it feared a worst-case Brexit might hit. But we can’t ignore the risk.

Not much point talking about whether we are going to spend the State’s money on tax cuts or extra spending in the next few years before we know for sure whether the cash will be there. If Brexit is – somehow – sorted and a no-change transition period kicks next March, then a big cloud is lifted off our economic horizon. But if there is no deal and no transition period, then all bets are off.