Cliff Taylor: North should grasp Brexit deal with both hands

Belfast could market itself as a unique destination for foreign direct investment, allowing a free flow of goods into both the EU and the UK 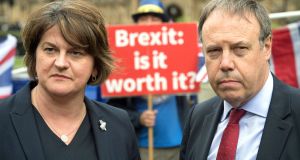 DUP leader Arlene Foster and deputy leader Nigel Dodds. With no functioning assembly in the North and the Conservatives relying on the DUP to prop them up in government, the DUP view has got all the airtime. Photograph: PA Wire

The Brexit withdrawal agreement is a bad deal for the UK. The fantasy economics promising an easy exit and a bright new future have crashed into the inevitable reality of a messy divorce. For Ireland, the agreement was a good outcome –perhaps better than expected in some respects – and so its likely failure to pass the House of Commons is a big disappointment. But for the North the proposed deal would have been a win. This makes it all the more extraordinary that one of the problems in getting it through the UK parliament is opposition from the DUP.

As with all sides, there was never going to be a perfect Brexit outcome for the North. But the degree to which the EU side agreed to bend to accommodate the particular situation of the North was remarkable, and went beyond what would be needed to avoid a hard border on the island of Ireland. Were there a functioning government in the North it could have greeted this as an extraordinary success.

Consider for a moment what was agreed as part of the backstop agreement which would apply in the absence of a new trade deal after Brexit guaranteeing an open Irish border. Companies in the North would be able to export freely into the British market and also into the EU. There would be some checks and controls on goods coming from Britain, but it is clear that the EU is prepared to bend a bit to minimise these.

Checks on goods will be based on a “risk assessment”, and will take place at company premises rather than at borders. There are already animal health checks at Larne, for example, which would likely have to be stepped up. And, yes, there would be some new paperwork and other bureaucracy facing trade between the North and Britain.

The North will effectively remain in the EU single market – the rest of the UK could diverge from its rules and regulations over time. It will also remain a full remember of the EU customs union while the rest of the UK will stay in a more basic customs arrangement.

So there will be change. But Brexit was always going to be about damage limitation. And as well as limiting the damage for the North, the deal, as outlined, surely creates opportunities.

The North, for example, could market itself as a unique destination for foreign direct investment allowing a free flow of goods into both the UK and EU. This could also be a huge benefit to domestic businesses, and avoid much of the disruption of Brexit.

The deal makes clear that there would be nothing stopping the UK from allowing free access to products coming in from the North – and no reason why it would do so.

And full alignment with the EU trading bloc would allow firms in the North to sell freely into the EU and benefit from other trade deals which the EU has in place with third countries.

It is an extraordinary win-win. Yet the DUP castigates the deal as dividing the union, and putting a border down the Irish Sea. Given the North’s already unique status under the Belfast Agreement and the limited nature of new checks, this stance is crazy.

The logic of Brexit – which the DUP supported – would be to make access to EU markets for businesses in the North more difficult, tying the economy there to the uncertain future facing the rest of the UK and the fantasy land of new trade deals with countries like the US.

The two big markets for the North are the two closest ones – the EU, including the Republic, and the UK. That it would risk a “no-deal Brexit” by turning down a deal which offers free access to both as a backstop in case something even better is not on the table is extraordinary.

Of course, the backstop is only meant as a temporary arrangement. But the sensible course of action for the North would be to grab it with both hands and make the political case that whatever new deal is negotiated in future cannot make matters any worse.

Rather than rejecting the backstop the DUP and the other political parties in the North should be looking for a cast-iron commitment that any new trade deal will not involve a step backwards in terms of access to either the UK or EU. Given the political charge of the Irish Border issue and the relatively small size of the North’s economy, this would surely be achievable.

With no functioning assembly in the North and the Conservatives relying on the DUP to prop them up in government, the DUP view has got all the airtime. Sinn Féin makes the case that the Remain vote in the North must be respected, but with normal politics suspended in Belfast there is no coherent political argument to counteract that of the DUP.

While the business community and farmers have spotted the advantages of the withdrawal plan, there is no political mechanism to push this argument.

The DUP’s Jeffrey Donaldson went as far this week as criticising business and farming lobby groups for supporting the deal. “I don’t believe they have read the detail of this; they have not read the 500 pages,” he told the BBC.

It strikes me that this has political implications for the DUP in alienating much of its base – and a lot more if there is a no- deal exit – but the party does not appear to be for turning on this.

Like the Brexiteers in the Commons, the DUP is saying “no” on the basis that something better is available. It isn’t. What is remarkable is just how far the EU has gone to meet the concerns of the North.

4 Stephen Collins: Trump values appear set to prevail in Irish politics at the next election