Cliff Taylor: Donohoe must not rush to boost bankers’ pay or bonuses 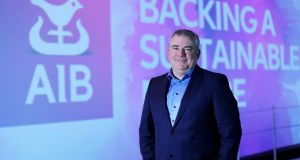 The bankers are at it again. Pay us more, they plea, or our top talent will all leave. And there is some evidence to support the argument. On Friday, AIB chief Bernard Byrne announced he was moving on, following the bank’s chief financial officer, Mark Bourke, who also recently announced his departure. The Government has commissioned a study from an international consultancy firm, which may well conclude that there is a retention problem in Irish banking and that the pay and bonus rules need to change.

It will then be up to Minister for Finance Paschal Donohoe to decide whether he wants to bite the bullet. Does he want to break the €500,000 salary cap for banking executives? Or allow the banks to bring back bonuses, which are more or less outlawed as they are taxed at 89 per cent.

The Minister should not rush to tear up the rulebook. In 2008, the chief executives of the then six main Irish financial institutions took home €10 million in total. It would be nice to think that we could rely on the boards of the main banks to ensure that this kind of madness would never return. But after the way they handled the tracker mortgage scandal you wouldn’t be sure. And we need to be certain that incentives right down the line in the banks do not lead to a repeat of the short-term, profit-chasing behaviour which led to the bust.

We need to step back for a minute here. Irish banks are not big international institutions. The balance sheets of the banking sector across Europe shrunk significantly in recent years, but the scale of this in Ireland was particularly dramatic. In terms of assets, AIB is literally half the bank it was before the crisis and has sold off interests in Poland, the US and Ireland.

From fast-growing institutions with international operations, Irish banks are now smaller players focused on the Irish market and relying on lending to Irish consumers and businesses. It is back to taking in deposits and lending out mortgages. Whether you measure by assets or stockmarket valuations, our banks do not appear in the top league of EU lenders. The extent to which running operations of this size justifies massive rewards is debatable. And the banks are back making decent profits, despite the absence of bonuses to “incentivise” executives.

Our banks do not appear in the top league of EU lenders. The extent to which running operations of this size justifies massive rewards is debatable

The Irish banking sector does, it has to be said, face particular problems. One is the ease of transfer to the UK. David Duffy, the former AIB chief executive joined Clydesdale and Yorkshire Bank in 2015 on a basic salary of £1 million (€1.13 million) and, when a bonus is added in, earned £2 million last year. Clydesdale is less than half the size of AIB in terms of assets and a third of its size in terms of stockmarket value. Likewise chief financial officer jobs in the UK would typically pay £1 million-plus.

Another key issue is the arrival of banks previously based in the UK into Ireland ahead of Brexit. This is one of the reasons for the churn in the banking groups.

Then there is the general buoyancy of the financial sector, which has had a few good years, with stockmarkets rising ( this may be ending ) and investors desperately seeking homes for cash which earns little or nothing on deposit. It is striking that Bernard Byrne is leaving the top job at AIB for a deputy chief executive job at Davy, the stockbroking firm. The general buoyancy in finance is leading to an outflow of skilled people from banking at all levels. At the middle levels, the issue is not the cap , but the effective ban on bonuses.

It would be churlish to say that the issue of bankers’ pay and the rules that apply should never be re-examined. But Paschal Donohoe should not be rushed into wholesale change. The rules do need to be kept under review. Incentive schemes, properly structured, have their place. The €500,000 cap may need to be upped, in some cases, but the Government both as rule-setter and shareholder must ensure that the Irish banks don’t go off competing with the gold-plated London salaries.

Bonuses and high-incentive packages tend to be a one-way street, rewarding good performance but with no take-back  when things go wrong

And in future, a vital point is the impact of pay and incentives on behaviour. The report drawn up by Peter Nyberg, the Finnish academic and finance expert, found that in the run-up to the crisis, “rapid loan asset growth was extensively and significantly rewarded at executive and other senior levels in most banks.” Bankers were rewarded for throwing out loans to the property sector.

We can’t repeat this mistake. Longer-term share-based incentives, for example, may work better than annual bonuses. And the whole agenda of reforming banking culture remains. Bonuses and high-incentive packages tend, all too often, to be a one-way street, rewarding good performance but with no take-back or reduction when things go wrong. Legislation now promised to make senior bankers personally accountable is at least a step in the right direction, though how this works remains to be seen.

There is also the timing issue. Here there is politics,with Fine Gael entering discussions with Fianna Fáil on a new confidence-and-supply deal. But there is more, too. Danielle Nuoy, the head of the European Central Bank’s banking supervisory arm, said in Dublin earlier this year that bankers had to finish cleaning up their balance sheets from the old crisis before bonuses returned.

The Irish banks are doing okay and are back in solid profit. Those who led the banks out of the crisis deserve credit – and some reward. But more has to be done to deal with the crisis legacy – and an awful lot more to win back the confidence of the public. Now is not the time to be reinstating big bonuses and multimillion-euro pay packages.

1 We are ‘sale agreed’, but can we go back with a lower offer?
2 Working from home: New costs, new stresses and little relief
3 Fintan O'Toole: Last week's hysteria shows politicians and judges need to get a grip
4 Coronavirus: What will reopen in Ireland’s phases to ease restrictions?
5 André Leon Talley: How Anna Wintour threw her right-hand man ‘under the bus’
Real news has value SUBSCRIBE