Cliff Taylor: Ireland could be in a tight corner on EU digital tax plan 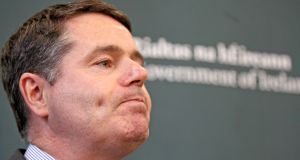 Minister for Finance Paschal Donohoe. Does he accept the precedent of EU interference in our tax affairs and risk the backlash? Photograph: Donall Farmer

The Revenue Commissioners have estimated that if the EU goes ahead with a plan to impose a special tax on some of the digital revenues of the big tech players it would cost the Irish exchequer €160 million. But for Ireland this is not about the money – it is all about the precedent. And depending on how this plays out, Minister for Finance Paschal Donohoe could find himself in a tricky position, particularly if he is the last man standing it what appears to be a shrinking minority opposing the tax.

Next week’s meeting of EU finance ministers will be an important indicator. While the meeting will not make any decision, it will be a key marker of how many states support the move and how many are still holding out. Ireland will hope to retain the support of some Scandinavian states, notably Sweden, in opposing the tax.

But there is a big push, led by France and the European Commission, to get this agreed by the end of this year. Seasoned observers say the minority against the tax is shrinking, though the position of some remains unclear. Germany has yet to show its hand fully and is reportedly worried about the reaction in Washington . As ever, Berlin’s attitude will be key.

The idea for the digital services tax springs from a frustration in the big European capitals at the slow progress of international efforts – led by the OECD – to extract more tax from the big US multinationals. It would hit Irish revenues by ensuring companies paid more in big EU markets, and thus they would have less profit to declare here. But the amount involved, against corporate tax revenue which has soared to more than €9 billion, is not significant.

Paris will know that if it is not signed off by December, then it will probably go into cold storage, as the supportive Austrian EU presidency ends and the current term of the European Commission starts to wind to a close. Ireland will know this too. It is all complicated by unilateral moves by some countries – including the UK and Spain – to impose some version of the tax in their own countries, pending international moves.

The digital services tax is not pretty. The proposal is a tax – of 3 per cent – which would apply on sales rather than profits, applies only to companies above a certain size and only to some revenues, largely those relating to advertising sales on digital platforms and revenue from digital marketplaces, such as run by Amazon. Technically it is messy and this is a point in Ireland’s favour.

But the political problem for Ireland – and the big tech players – is that the US companies have gamed the tax system to pay ridiculously low amounts of tax on their earnings outsider the US for years. US tax law is only now starting to catch up. By pushing tax “planning” too far and refusing to see the writing on the wall until it was way, way too late, Apple, Google, Facebook and the rest left themselves exposed.

As a result, Ireland is now exposed. Some of our own decisions over the years have moved too far to suit the US multinational tax agenda. The infamous “double Irish”, for example, helped US companies to shift profits offshore and the decision when it was abolished in 2015 to allow companies using it to continue to do so until 2020 was a mistake.

There is no doubt that the kind of aggressive tax arrangements helped by measures such as the double Irish will now be progressively closed off. The digital services tax plan is just a staging post in much bigger European Commission plans on corporate taxation. The proposed endgame, a common corporate tax base in Europe, would threaten both our tax revenues and our drive to attract investment. The departure of the UK robs us of an ally in opposing this.

Ireland much prefers the OECD approach to corporate tax reform rather than the EU-led moves, as it poses less direct threat to us. Could we sign up to the digital services tax if there is a clear sunset clause? Or could we win some concessions in relation to delaying future EU moves on corporate tax in return for this move going ahead?

This is all happening, too, in the context of Brexit, where, ironically, France is one of our bigger supporters on the Border issue. Nowhere have I found any evidence that any of our EU partners have linked the issues of corporation tax and Brexit in talks with Irish Ministers. Sources here insist they are being treated as separate issues. Yet it is also true that, as a small country, we only have so much political capital. It would suit us if the tax issue could be kicked on until after the conclusion of the Brexit withdrawal talks.

Paschal Donohoe will hope that the coalition of a few countries will hold together to oppose the digital sales tax. He will not want to have to make the choice to veto or not. If he does, it will be a delicate balance. Does he accept the precedent of EU interference in our tax affairs and risk the backlash? Or is he better to keep his veto in his pocket for the bigger tax battles ahead? I suspect, if push comes to shove, he may not veto the plan. But he will be fervently hoping that he is not faced with the choice.

Even if this threat is fought off , or delayed, the writing is on the wall. Sooner or later, the international tax rules are going to change, with significant implications for us. The only question is how and when.