Churches must be more vocal in speaking about EU successes 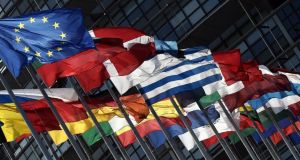 “The whole European co-operation project is at a ‘Kairos moment – a crucial moment of truth-telling’.” Photograph: Frederick Florin/AFP/Getty Images

Jacques Delors, speaking as European Commission president in 1990, made a historic appeal to the churches to contribute to giving Europe “a heart and a soul”. As Europe faces multiple and interrelated crises how are the churches responding to that prophetic call?

The perhaps surprising answer is with great wisdom and insight through the Conference of European Churches (CEC). It is a fellowship of 115 Orthodox, Protestant, Anglican and Old Catholic churches and 40 national councils of churches, such as the Irish Council of Churches, throughout Europe.

In June 2016 the CEC issued a detailed open letter to the churches entitled What Future for Europe? Reaffirming the European Project as Building a Community of Values.

This highly significant open letter has evoked responses from many churches reflecting deeply on European Union crises such as Brexit, migration and refugees, economic governance, foreign and security challenges, political gridlock, the rise of Euroscepticism and right-wing authoritarian populism.

The Methodist Church in Ireland has made a detailed response to the open letter calling for special-region status for Ireland as new relationships are forged between the UK and the EU.

In November 2016 the CEC published a major position paper entitled Seeking Justice and Prosperity for our Common Future in the European Union, which focuses upon how theology, economics and politics each contribute to the resolution of the crises facing an EU dominated by an ideology of “market fundamentalism” to the detriment of its foundation principles of social solidarity and justice.

The result has been that the responses to the crash of 2008 eviscerated public support for the EU in a union of “winners” and “losers”.

As Delors realised, the EU needs a “soul”. The wisdom about human flourishing embedded in the faith communities of Europe may well provide this for citizens of the EU.

Seeking Justice and Prosperity provides a set of solid, evidenced-based recommendations towards developing an economic order which would serve the fulfilment of human needs and ends, and the flourishing of human beings.

The EU, after the triumph of Emmanuel Macron, has a new opportunity for positive reform: the values of respect for human dignity, democracy, equality, the rule of law and respect for human rights. When realised in policy and practice these will win renewed citizen support.

The EU has had major successes: unprecedented peace in Europe and indeed in Ireland, an area of freedom, security and justice without internal frontiers; an internal market based on the freedom of movement of people, goods and capital; a new currency, the euro, for 19 countries; the promotion of scientific advance; and a record of cohesion between diverse countries following the collapse of communism.

We should never take for granted achievements such as the EU Charter of Fundamental Rights and the European Social Charter or the world’s biggest emergency humanitarian aid budget run by the EU.

The churches must be more vocal in speaking of the successes of the EU given what is at stake if it were to collapse in a world dominated by Vladimir Putin, Donald Trump and China.

The whole European co-operation project is at a “Kairos moment – a crucial moment of truth-telling”. We must speak not only the truth to power but also to the populist media and to people in general. Let us not forget the failure to call out the blatant lies in the Brexit referendum in Britain and resolve not to fail again.

Seeking Justice and Prosperity stresses the ethical dimensions in EU policy decision-making and the broader social objectives of well-being and cohesion and cites the clear commitments in the Treaty on the Functioning of the EU to these priorities.

At the heart of the EU must be a vision beyond “prosperity” for some and it must be shaped by a narrative of the European common good and social solidarity: we need to see “Social Europe” at the top of the agenda if public trust and support is to be rekindled for the EU.

Dr Fergus O’Ferrall, a governor of The Irish Times, is Lay Leader of the Methodist Church in Ireland. A member of the European Affairs Committee of the Irish Council of Churches, he has attended dialogues between CEC and the European Commission and the recent Conference of Churches on the future of Europe, in Edinburgh. CEC publications are at ceceurope.org