Minister for Transport Shane Ross has rejected claims he had a “vendetta” against the judiciary or the legal profession in promoting controversial legislation to change the system of selecting judges. Video: Oireachtas 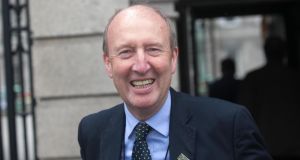 At Ennis District Court last week, Judge Patrick Durcan, a former Fine Gael politician, excoriated broadcaster Joe Duffy “and all the great panjandrums of the media” who “are attacking the courts for not sentencing people”. District judges make these kinds of outbursts occasionally. They are ironic interventions, because some of the greatest panjandrums ever to be heard in Ireland have populated judges’ benches or appeared in court as self-worshipping barristers.

Panjandrum, meaning a person who has or claims to have a great deal of authority or influence, is a word seldom heard today. It has its origins in a Samuel Foote poem from the mid-18th century, mocking an actor’s claim he could memorise any paragraph after a single reading; its usage evolved to refer to any exalted personage or pompous official.

Legal panjandrums can be insufferable. Ruadhán Mac Cormaic, in his authoritative history of the Supreme Court published last year, reminds us that the work of judges can be wrapped in a “forbidding cloak of archaic, esoteric language and otherworldly courtroom conventions”.

Judges can be petulant and cocooned, and, as Mac Cormaic observes, judges and lawyers can pay “grossly exaggerated” tributes to each other. Yet they can also be inspirational public servants; as Brian Walsh, a daring Supreme Court judge in the 1960s, put it: “We can see the consequences but it doesn’t mean we are going to be deterred from what we think is right.”

Over the decades, through judicial review and interpretations of the Constitution, they have identified crucial fundamental rights and procedures. They have also, at times, been given too much power due to the cowardice of politicians in refusing to legislate, thus forcing the courts to make decisions that belong to parliament.

Judges have also shown themselves capable of self-defeating contempt. The referendum to allow the government to reduce their pay in 2011 happened because they failed as a group to act quickly and collectively and sign up to a voluntary scheme with the Revenue Commissioners in lieu of a mandatory public-service pension levy. There are also a number of gifted and spectacularly wealthy barristers whose experience and insight would make them fine judges, but not enough of them are prepared to take a hefty pay cut in the name of public service by putting themselves forward to be considered as judges.

No one disputes that many judges, current and past, have been appointed precisely because of their political allegiances. Cecil Lavery, who died 50 years ago, was a Fine Gael TD in the 1930s and appointed attorney general in 1948. He was also elected to the Seanad that year and remained as attorney general and senator until appointed, in 1950, a member of the Supreme Court, where he served until 1966.

That Fine Gael connection did not define his legal contribution. His colleagues regarded him as having “a brilliant legal mind, a major capacity to apply and lucidly to explain a legal proposition, a wide knowledge of the law and a swift retentive memory for it . . . He was without vanity or pomposity and though aware of his own capacity, never sought by reason of it to dominate others . . . an exemplary judge.”

That was the assessment of Thomas Finlay, chief justice from 1985 to 1994 and another Fine Gael politician turned judge; he was originally appointed to the High Court by a Fianna Fáil government.

Finlay’s assessment of Lavery appears in the Cambridge-published Dictionary of Irish Biography, which is indispensable for research of Irish history. There are other entries on deceased judges written by other judges in this dictionary. Presumably they were asked to write these entries because of their personal knowledge of the characters, their familiarity with their legal work and because judges, by reason of their profession, tend to be socially discrete and are better known by fellow judges than by those outside the profession.

That does not mean judges are best equipped to make completely objective assessments of their judicial colleagues, but then who is? Those outside the profession? Who is best qualified to assess the merits or otherwise of medics or teachers? Surely the views of those with the relevant expertise should carry more weight? In my field, would it not be inappropriate for a historian to be appointed to lecture in history by an interview panel dominated by non-historians?

For those obvious reasons, the proposed Judicial Appointments Commission Bill, with its provisions for a lay majority on the commission, is flawed. Government patronage in the appointment of judges is and always has been inappropriate and is clearly untenable, but the new Bill is not designed to ensure balance in the judicial appointments process, or do justice to a more nuanced history than the word “cronyism” would suggest. Ironically, the Bill is championed by the grandest panjandrum in contemporary Irish politics. The Bill will not serve justice; it will merely massage one giant ego.