A good deal for Northern Ireland 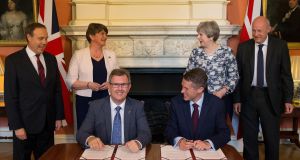 The deal struck by the Democratic Unionist Party (DUP) to keep the Conservative government in power in the United Kingdom is a good one for Northern Ireland and by extension the whole island of Ireland.

The party used its pivotal position in the new House of Commons to extract an extra £1 billion in funding for Northern Ireland over the next two years, with £400 million of that for infrastructural projects and close to £200 million for the health service. Announcing the deal after meeting prime minister Theresa May in Downing Street, DUP leader Arlene Foster hit the right note by stressing that the deal was for the benefit of all the people of Northern Ireland and not for one community only.

The DUP negotiating team played its cards shrewdly, refusing to be pushed into a premature agreement in the immediate aftermath of the election by a complacent Conservative Party and holding out for as much as could be obtained.

While the DUP remains committed to Brexit, the reference in the confidence and supply agreement to the importance of the farming sector in Northern Ireland is an indication that the party will be supporting the softest possible exit.

An encouraging aspect of the deal is that far from getting in the way of the restoration of the power-sharing institutions at Stormont it should provide an incentive for all the parties in the North to get involved in deciding in detail how some of the extra funding is allocated.

Foster was emphatic in her commitment to doing a deal to have the Executive restored, saying that now more than ever in the light of Brexit there was a need for people at local and national level to work together to find solutions.

May echoed those sentiments, saying the British government remained steadfast to its commitments in the Belfast Agreement and its successor deals in governing in the interests of all parts of the community in the North.

While there have been fears among nationalists that a deal between the DUP and the Conservative Party would result in a more partisan British approach to the latest Stormont talks, the indications are this has not happened. Foster flew back to Belfast from London yesterday afternoon to engage in the talks along with Minister for Foreign Affairs Simon Coveney and Northern Secretary James Brokenshire. In his initial reaction to the deal, Coveney noted that an agreed devolved government position could see more effective and inclusive representation of the unique circumstances of Northern Ireland at Westminster.

There are just two days left until the deadline set by the British government for the talks to conclude and while it will take a big effort from all five parties, particularly the DUP and Sinn Féin, the atmosphere should be improved rather than damaged by the deal in Downing Street.