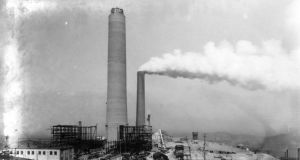 Back in the days when people did the Lough Derg pilgrimage on foot, it used also be the custom to stop en route at the Cavan hamlet of Swanlinbar and take the waters there.

The benefit of those was supposedly physical, not spiritual. The village had a chalybeate spring, full of iron. As late as 1971, the author of a book called Irish Country Cures, Patrick Logan, noticed that the spa “still had the smell of rotten eggs, perceptible from several yards”.

Historically, Logan wrote, locals had ignored the waters. The gentry from surrounding parts, by contrast, couldn’t get enough. Visitors at one time drank up to “two gallons” (eight litres) a day.

According to Lewis’s Topographical Dictionary of Ireland (1837), they may also have benefited from an early version of Neven Maguire. “Contiguous to the well is a handsome pump-house, in which the visitors usually take breakfast, and on reassembling an excellent dinner is provided.”

It is from this same water source, but indirectly, that the name Swanlinbar derives. You might easily mistake it for another anglicisation of an ancient, poetic Irish name. In fact, it’s a corporate acronym, comprising a syllable each from the surnames of four men – Swift, Saunders, Darling, and Barry – who set up a mining company there during the 1600s.

We know this because the Swift was an uncle of Jonathan, who later damned their enterprise as having produced “the worst iron in the kingdom”.

At least the placename was a success. It may also have been an improvement on the original. The village’s old Irish name was Srath na Muc, “river valley of the pigs”.

Around the time the gentry were still taking waters in Swanlingbar (it used to have a “g” in it, since eroded), a future miner called Marcus Daly (1841-1900) was born elsewhere in Cavan. He is now probably the second most famous person ever to have left Ballyjamesduff, first for New York, where he sold newspapers, then California, where he arrived a little late for the goldrush but made the start of his fortune from silver.

Still chasing silver, he later headed for Montana, where in 1876 he found more of it in one of those steep rocky hills called “buttes” (perhaps significantly, the word rhymes with “cute”).  But when the silver lining ran out there, digging deeper, he found the real motherlode – copper. It was a lightbulb moment. Thanks to Thomas Edison and others, copper was about to be the next big thing.

The “richest hill on earth” quickly became a city, named simply Butte, which for a rumbustious 40 years afterwards drew emigrants from every town in Ireland, and many countries besides. The work was dangerous but well paid if it didn’t kill you. Among other distinctions, boom-time Butte had the second-biggest red-light district in America.

When Daly and his backers bought their first mine there, it was called “Alice”. Less charmingly, he named the second one “Anaconda” after the giant South American snake.

The snake’s constricting powers were a favourite metaphor of the civil war era.  Daly’s inspiration may have been the “Anaconda Plan”, by which Union general Winfield Scott had talked of encircling the rebel South, crushing it economically and militarily.  The Anaconda Mining Company, as it became, had broadly similar ambitions for the competition.

Daly bought out as many other claims as possible and invested heavily in local and national politicians. Still, even at his height, he did not have things all his own way. He became one of three “copper kings” who vied for supremacy and he lost some major battles, including the one that led to Helena becoming Montana’s capital.

In wasn’t until 1910, a decade after his death, that the Anaconda Company finally achieved the monopoly it craved. By the 1920s, it was the fourth largest company in the world. Sixty years later, it was gone. But it had left its name on the map.

A century earlier, as the mining boomed, Daly realised he would also have to build a big smelter somewhere. He ruled out Butte itself because it had insufficient water and was already badly polluted. And when he found a suitable site, some 20 miles west, he planned a town there too.

This grew rapidly into a place that might have been worthy of state capital (Daly’s thwarted hope), soon boasting even an opera house, where Mark Twain would be among the sell-out acts.

And a bit like Swanlinbar, minus the poetry, it was named after the once-almighty company that built it, which it has since outlived. When I visited the grave of a grandaunt there some years ago, the town was still called Anaconda.