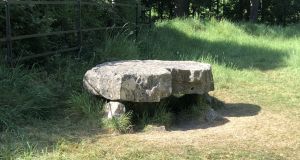 The Knockmaree dolmen, named for the hill it stands on, is more strictly speaking a cist grave – one of a small number known in Ireland

Even for those of us who use it regularly, Dublin’s Phoenix Park can still have hidden depths. I read about another one somewhere recently and thought that I must have passed that hundreds of times and not noticed.

Then, while exercising nearby one evening last week, I left the path beaten by my fellow lockdown escapees and climbed a short, steep ridge to where the map had pointed. And sure enough, there it was – a miniature dolmen, at least 4,500 years old.

The Knockmaree dolmen, named for the hill it stands on, is more strictly speaking a cist grave – one of a small number known in Ireland. When first discovered in modernity, by workmen excavating a mound in 1838, it contained two male skeletons, in crouched position to fit the small space, along with shell jewellery and a flint knife.

The residents and their accessories were relocated during a site survey by the Royal Irish Academy. Now only the stone remains, minding its own business or what’s left of it.

Knockmaree was assumed by the RIA to mean “Hill of the Mariners”, a derivation the place-name database Logainm.ie considers “dubious”. The monument’s capstone, at least, probably came from the river Liffey, a short distance away. And whether the occupants of the grave were mariners, buried high and dry, they contributed to at least one local legend.

In the Dúchas schools folklore collection of the 1930s, a pupil named Paddy Mooney records (with the usual immaculate handwriting) the story of “sea robbers” who once raided the home of a wealthy man in Chapelizod, forcing him to bury his “treasure” on hilly ground nearby.

“About 80 years ago”, Paddy continues, workmen were flattening a mound in the Phoenix Park and took a break for dinner, during which “a poor man went up to the half-demolished hill”. When the workers returned, they found a few gold coins scattered around. Meanwhile, reports emerged that the man had been observed leaving the scene “with a sack full of something” on his back.

The Knockmaree dolmen is close to St Mary’s Hospital, which has been the source of much sadder stories of late.  But that too has hidden depths. It was built 250 years ago as the Royal Hibernian Military School, to educate first the orphans of men who had died in British army service and later for the offspring of living soldiers

It became in turn an army feeder school, with half of its graduates joining up at the height of empire. Ironically, today, its most famous old boy is Liam Mellows, who developed his fascination with military tactics there but later turned them against Britain before being shot by a Free State firing squad in 1922.

Another man who spent part of his childhood in the school, where his father was chaplain, was Sheridan Le Fanu. Le Fanu is now half the reason Chapelizod is among Dublin’s most written-about suburbs. James Joyce is the other half.

Even though it was one of the relatively few parts of the city Joyce never lived in, it was a key influence on his life and the family’s itinerant existence. His father’s Chapelizod experience had been roughly the opposite of the poor man in the legend. He sank a large amount of money in a distillery there in 1874 and lost it all, along with his job.

As for Le Fanu, he even set one of his ghost stories on Knockmaree Hill. Published in 1851, it tells the tale of the “Bully Larkin”, an “ill-conditioned fellow of Herculean strength” who had supposedly lived in Chapelizod about 30 years before.

Larkin was used to having his own way until he fell for “a certain buxom damsel” who preferred the charms of a younger, willowy local called “Long Ned” Moran. The rivalry escalated until one day, accompanied by a mob of idlers, the two men filed through the gate of Phoenix Park, mounted “the hill overlooking the town” and fought a fight of such prolonged savagery that Moran never recovered.

His death had a subduing effect on Larkin, who nevertheless thrived sufficiently for a few years afterwards as a well-paid gardener in the chief secretary’s lodge (now the US ambassador’s residence).

Then one night, returning home across the hill, he was approached by a man stripped to the waist, as if for a fight.  It was of course Moran. Faced by this dread spectacle, Larkin suffered a paralytic stroke and collapsed. He later recovered consciousness but not health.

And his years of disability were further plagued by a certainty that Long Ned was waiting for him in hell, or somewhere on the way there, to begin their long-postponed return bout.

1 We need to pay very close attention to what is happening in Britain now
2 Trump says, ‘I have the best words.’ Now this comedian’s going viral for lip-syncing them
3 Emily Maitlis thanks BBC viewers for support after Cummings row
4 The human cost of Covid-19: new figures reveal the toll on Ireland's care homes
5 What do you do when you meet a bear on a walk? Copy this 12-year-old
Real news has value SUBSCRIBE