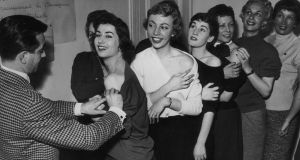 Members of the Association of French Models line up for their smallpox vaccinations in 1955. The disease killed 300 million people in the 20th century alone. On May 8th, 1980, the World Health Organisation declared smallpox officially eradicated. Photograph: Hulton Archive/Getty Images

VE Day will dominate Friday’s headlines, understandably, but the world is also marking the anniversary of another famous victory, and in a conflict far greater than the second World War. It is exactly 40 years ago since, on May 8th, 1980, the World Health Organisation declared smallpox officially eradicated, the first and still only human disease with which this has been achieved.

It had plagued the planet for at least 3,000 years and, in the 20th century alone, killed 300 million people. By comparison with lives saved, the financial benefits are a minor thing. Even so, the WHO – currently suffering budgetary punishment because of US displeasure about the world’s latest pandemic – believes eradication has also saved the global economy $1 billion a year.

There was never anything small about smallpox. It acquired that name in English, sometime in the 1600s, only to distinguish it from the “great” pox, ie syphilis. There were “major” and “minor” versions of the virus involved – variola – the minor being much less fatal. But between them they were still killing millions in Africa, Asia, and South America well into the 1960s, when the last great campaign to defeat them intensified.

Well might the 1980 resolution of the World Health Assembly have echoed the language of the liberating armies from 35 years earlier. After considering all the evidence, it read, [the assembly] “declares solemnly that the world and its peoples have won freedom from smallpox”.

That was almost 200 years on from Edward Jenner’s crucial breakthrough, courtesy of a milkmaid called Sarah and a cow named Blossom, from which the former had caught the relatively harmless cowpox. Jenner wasn’t the first to notice that cowpox made people immune to smallpox.

He was just the one who proved it and refined the techniques. As for Blossom, if she is a minor hoofnote in history, her species was immortalised in the process, via the word vaccine, from the Latin for cow, that is now applied to all such treatments.

But the long march to victory over smallpox had begun long before that, as far back as the 15th century at least, when the Chinese were fighting it with a form of inoculation. A riskier process using the virus itself, this had gradually spread to Europe, including Ireland.

In 1796, the very year Jenner was starting his experiments, a French visitor to this island recorded an encounter with one of the freelance inoculators who made a living from vaccination’s predecessors.

Jacques Louis de Bourgenet, Le Chevalier de la Tocnaye, was fleeing revolution at home and, speaking of long marches, walked more than 1,000 miles around Ireland, being charmed by the natives’ humour and hospitality, and frequently by their resourcefulness, as in the case of the inoculator he met while crossing the Ox Mountains.

The man had been bound for the priesthood once until family misfortune deprived him of an education. Now he had fallen back on plan B, medicine, earning a modest £30 to £40 a year as a travelling practitioner of variolation, as it was called.

Despite the risks, he claimed to have inoculated 361 children that year, with only one death.  The French aristocrat was both impressed and amused by the man’s frank admission that, ethics aside, he couldn’t afford high fatality rates. If a patient died, (a) he wouldn’t be paid and (b) he would be “beaten”. The Frenchman joked that this was a model of medical insurance that should be adopted more generally.

That period also marked the closure of an era involving one of the accidental cultural influences of smallpox, especially in Ireland. When the disease didn’t kill you in childhood, often, it left you blind, reducing career prospects. For those afflicted, music and literature were two possible escape routes from utter poverty.

Thus, many of the famous Irish harpers of past centuries had been blinded in childhood by the disease, most notably Turlough Ó Carolan (1670-1738). Likewise the bards, including Antoine Ó Raifteirí (1779-1835).

When the United Irishmen Society, in an attempt to revive the ancient art of harping, rounded up surviving exponents for a festival in Belfast in 1792, most of the 11 musicians who played were blind. One was 97. Apart from a teenager, the rest were over 45.

An offshoot of the event, however, was the establishment of a Belfast Harp School, where students included a young Padraig Dall Ó Beirne, born in Monaghan circa 1794, and blinded by smallpox at age two. Among his lesser claims to fame now is that he was my great-great-grand-uncle.  More fortuitously, he also went on to be described, in this newspaper and elsewhere, as “the last of the great Irish harpers”.

1 If you are young and live outside Dublin you could be in trouble
2 ‘Unseasonably’ windy weather set to buffet Ireland
3 Fintan O’Toole: Future of the American republic is in grave danger unless Trump is defeated
4 Taoiseach ‘disappointed’ he only learned of Barry Cowen’s driving ban on Friday
5 Ruth Negga: ‘People who say they don’t consider skin colour... are you f**king blind?’
Real news has value SUBSCRIBE