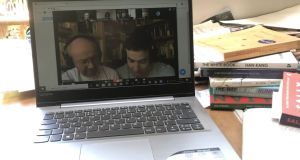 I had the strange experience of attending from my kitchen a global live reading, via Zoom, of James Joyce’s Finnegans Wake

On Monday, as the sun blazed outside, I had the strange experience of attending from my kitchen a global live reading, via Zoom, of James Joyce’s Finnegans Wake. It was the 81st anniversary of publication and participants were continuing an annual tradition that began on the 50th, back in 1989, in the Mullingar House, the Chapelizod pub where much of the book is (sort of) set.

Since then, three-dimensional gatherings have taken place on a variety of stages including, last May, Dublin’s Mansion House. But in this plague year, the event had been forced to go virtual.

On the plus side, reflecting the extraordinary appeal of this infamously difficult book among a worldwide corps of masochists, the result attracted readers from Copenhagen to California and from Trieste to Tokyo. There was even one from as far away as Corca Dhuibhne, on the Dingle peninsula. That might have been one of the more challenging wifi connections.

Probably the most heroic participant, however, was an obstetrician in San Jose, where it had just turned 5am. She was working the nightshift and reading on her break. It may or may not explain such devotion to literature that her surname was Hamlett.

By contrast, my invitation to “lurk” (the technical term employed by joint convenor Des Gunning, who sent me the link) came mercifully free even of any reading responsibilities.

Thus with my copy of the book open at the relevant section – the so-called “Butt and Taff” dialogue, set during a drinking session – I was able to concentrate completely on the text. Despite which, when the reading ended some 80 minutes later, I was relieved to hear one of the participants asking the question that I was too embarrassed to, namely, “What was that about?”

Now, in general, Finnegans Wake is about life, the universe, and everything, with more specific reference to the fall and rise of mankind, from the Bible to the drinking song referenced by the title, via the various adventures in between, collectively known as history.

But since the protagonists are asleep or dead, the whole thing is described in a multilingual dream language, in which Joyce tried to do with words what the scientists of his time were doing with atoms –breaking them up into their component parts and recombining them to more powerful effect.

The book’s title is a small introduction to this technique, combining as it does the story of Tim Finnegan, singular, with a God-like command to all Finnegans, plural (hence the omitted apostrophe), as well as having component syllables that suggest both an end (fin) and a new beginning (egan/again).

Having said all that, and as explained by Paul O’Hanrahan, a man who has somehow turned the book into a one-man show, the Butt and Taff episode centres on a simple and very earthy incident. The tale of “Buckley and the Russian General”, it was apparently inspired by a story that Joyce’s father used to tell in pubs, having possibly inherited it from a real-life protagonist.

In any case, the Buckley in question is an Irish marksman at the Crimean War who, mid-battle, trains his rifle onto a Russian officer, until he notices the epaulettes of the man’s uniform, denoting senior rank, and hesitates.

After a momentary reluctance to shoot a great general, he steels himself again.

But now the target does what soldiers often had to do in the middle of battlefields, where they stood.

As the general lowers his trousers for the necessary manoeuvre, so Buckley again lowers his rifle, unable now to kill a man so suddenly reduced to a position of humility.

Finally, however, he sees the target wiping himself with a sod of vegetation, which Buckley manages to construe as an insult to Ireland. Recovering his motivation – plot spoiler alert – he pulls the trigger.

Getting back to the Wake’s broader theme, of mankind’s descent into the underworld and the attempt to rise again, it seems more apt than usual in our current plight.

Also among Monday’s readers, for example, was Prof John McCourt, a Dubliner exiled in Northern Italy, who had just published the last in a series of daily diaries about life during Europe’s strictest lockdown.

We’ve had things a bit easier here, or most of us have anyway.

After the reading, I was able to go for a Government-approved walk in sunny Phoenix Park. The allowed radius did not then include Chapelizod, although as of Tuesday, my expanded five-kilometre circle does.

Alas for now, the prospect of having a pint in Mullingar House remains, like a complete understanding of FW, remote.

1 Taoiseach dramatically sacks Barry Cowen as minister over drink-driving controversy
2 Miriam Lord: What the actual...? Martin blooded as Taoiseach as he wields axe on Cowen
3 Michael McDowell: Brace yourself for what a desperate Trump might do
4 Covid-19: Ireland likely faces ‘imminent second wave’ due to reopening, experts warn
5 My aunt never told us that Gran passed away with no will
Real news has value SUBSCRIBE