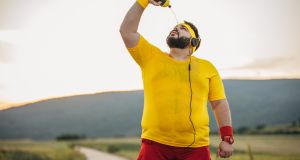 “If you’re wearing earphones the size of deer antlers, presumably all you can hear is the theme from Chariots of Fire, or Rocky, or whatever else is on that personally curated motivational soundtrack of the movie starring you.” Photograph: Getty Images

On the scale of ugly head accessories, oversized earphones must be somewhere just below undersized baseball caps. Even so, they seem to be ever more popular.

I even bought a set myself at Christmas and, at a modest €60, have been impressed by the sound quality.

But in my defence, I only wear them at home, at night, to listen to loud music without waking the house. I still wouldn’t be seen dead wearing them outdoors.

It’s not just their aesthetics that bother me. With a head like mine, they would arguably improve the overall effect.

It’s more what I think that wearing earphones in public says about you, which I wouldn’t want said about me.

At the very least, they are accidentally anti-social, reducing the chances of you exchanging pleasantries with other people, never mind of starting conversations.

But as earphones have become bigger, that seems to be half the point. The exterior “noise-cancelling” technology also helps cancel out other people. Earphone visibility only furthers that aim.

Professional footballers pioneered the technique on those walks from team bus to stadium, when they tend to be at higher risk than usual of encountering normal people, or journalists.

Of course, elite athletes need to keep themselves “in the zone” at such times. But wearing headphones while staring straight ahead also had the benefit of deterring any attempts at communication.

Now, that strategy seems to have been adopted more generally. Having your ears visibly muffed on public transport, or wherever, is an insurance policy against friendly strangers who might otherwise say hello or share an opinion with you about the weather.

My refusal to wear headphones in public comes at a price, I realise.

Music aside, there are a thousand podcasts I could usefully be listening to while out and about. During countless long runs in the park over the years, I could also probably have learned several languages by now, or at least passively inhaled a reading of War and Peace.

But leaving your ears uncovered has compensations.  One of the few joys of the coronavirus crisis, for example, is hearing the birds sing so clearly. With traffic banished from the likes of Phoenix Park, and the background hum of the city on mute, birdsong is audible as never before. The birds are not doing anything differently, I think – or maybe they are.

Maybe the unexpected silence has inspired them to produce exciting new work. In any case, the results are spectacular, if you can hear them.

But if you’re wearing earphones the size of deer antlers, presumably all you can hear is the theme from Chariots of Fire, or Rocky, or whatever else is on that personally curated motivational soundtrack of the movie starring you.

If I sounded like a running snob there, I might as well plead guilty. It’s true that, as a rule, people in running clubs tend not to wear earphones, even while training alone (as most now are). This is a partly the safety thing. When using public roads, you need to be fully alert to traffic and other dangers, which earphone wearers cannot be.

But conversation is valued too, where possible. And part of the culture is exchanging at least nods or jokes with other runners. That doesn’t work with earphone use.

Ten years ago, when they were less visible, it was always slightly soul-destroying to say something to a passerby, only to be met with the blank stare of an iPhone zombie. The big headphones have put an end to that, at least.

I’m tempted to draw a serious conclusion here, about how earphones symbolise the atomisation of society, with people becoming increasingly detached from each other and retreating into their own private spaces. But I’d better not, because all that was said before, 40 years ago, when the Sony Walkman was briefly fashionable.

Sociologists fretted then about the “Walkman Effect”, blaming it for things that had probably been happening already.

But that craze didn’t last, anyway. It was endorsed by Cliff Richard, in his Wired for Sound music video, and few products could have recovered from that.

Maybe the big earphone fad will pass too. Still, I’d be worried about its continued growth in the current era, when the need to cover all the other orifices on the human head has become so important.

If we ever get back to anything like normal life, we may have to get used to wearing masks and goggles in public, along with any earphones.

Sooner or later, somebody will combine all these social exclusion technologies. Then, presumably, the next big thing will be space helmets.