Britain must show signs of definitive Border progress by June

Simon Coveney: UK may have to review Brexit red lines for peace and prosperity 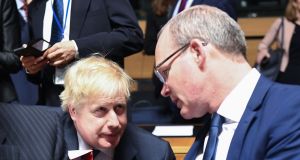 UK foreign secretary Boris Johnson and Minister for Foreign Affairs and Trade Simon Coveney: “Our first preference remains for the EU and UK to agree such a close and comprehensive future relationship that no backstop is ever needed.” Photograph: Emmanuel Dunand/AFP/Getty Images

In recent weeks, I have also visited my counterparts in Sweden and the Netherlands and welcomed my colleagues from Germany, Portugal and Croatia to Dublin. It is a priority to thank these countries for their unwavering solidarity on Brexit and to set out our negotiating objectives. It is also essential for us to understand their perspectives on all issues, not just Brexit.

Fine Gael has prioritised the building of these relationships in Government and such meetings are a regular feature for the Taoiseach; Minister for Finance Paschal Donohoe; Minister for Agriculture, Food and the Marine Michael Creed; Minister of State for European Affairs Helen McEntee; and many other Government colleagues.

It has never been true that Ireland’s only real partner in the EU has been the UK. We have worked closely for decades with many other member states on every issue. However the departure of the UK will be a blow for us and other like-minded countries. We are well-positioned to respond. The Government’s decision to keep an embassy in every other member state, even when recovering from the financial crisis, has paid dividends.

We know too the importance of maintaining strong Ireland-UK relationships. On Monday evening, I visited London for the third time this year and met cabinet office minister David Lidington and secretary of state for Northern Ireland Karen Bradley. Earlier in the day I had met Boris Johnson in Luxembourg.

This work is particularly important because of the critical juncture we find ourselves at in negotiating Brexit. We’ve made good progress at the European Councils in December and March to protect the Belfast Agreement and prevent a hard border on this island.

Before Christmas, the EU and UK agreed on a number of ways in which a hard border could be avoided, including by Northern Ireland maintaining full alignment with the necessary rules of the single market and customs union.

We built on that before Easter when the EU got UK agreement that the withdrawal agreement would need to include a legally operational backstop based on the December text. Prime minister Theresa May also clarified that this backstop would apply unless and until another solution was agreed.

We are now determined to make further significant progress on the backstop before the June European Council. There are five rounds of negotiations between now and June for the British government to follow through on the political commitments given last December and March and to reach agreement with the EU taskforce.

I was very clear in London that Ireland needed to see definitive progress by June. If not, it will be difficult for the negotiations to proceed as before.

Our first preference remains for the EU and UK to agree such a close and comprehensive future relationship that no backstop is ever needed. If this means the UK re-examining some of its red lines, in the interests of peace and prosperity, our hope is that that re-examination will take place.

At home, preparations for Brexit are continuing. Our officials and state agencies have been keeping businesses informed through all representative bodies and unions. We are preparing for the worst but working for the best so I hope a lot of these preparations will not be required. However, even a negotiated – or soft – Brexit will require action from individual businesses. The Government has already put in place a new €300 million Brexit business loan scheme, a €25 million Brexit agri-food loan scheme and over €50 million in Bord Bia supports for food businesses.

My department has also been involved in extensive contingency planning across government. Some of the documents involved should never be released in the strategic interests of the State’s negotiating position but I will, before summer, give a public update on this process after briefing the government.

As others have noted, managing Brexit is like trying to unscramble an omelette – it is the most exceptionally difficult of tasks. It is not a question of one side winning, but of reducing the damage. Political relationships will be key for doing this.

Simon Coveney is Tánaiste and Minister for Foreign Affairs