Jennifer O’Connell: Dogs with Instagram accounts? I blame the pawrents 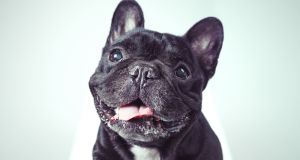 Years ago, a colleague introduced me to the concept of a Springsteen clause. Everyone in a committed relationship should have a Springsteen clause, he said: a no-repercussions, no-questions-asked night off that can be invoked in the event you find yourself in a random and unlikely encounter with somebody famous and desirable.

What would constitute a random and unlikely encounter? Could you buy tickets to a Springsteen concert and then pay extra for a backstage pass, I wondered. No, he said firmly. You’d have to, for example, end up sitting in the seat beside Bruce Springsteen on a plane, but the plane gets grounded, and you all get to spend the night in an expensive hotel, and later in the bar, he asks if you want a drink, and orders you a gin martini in a Tom Collins glass . . . I stopped him there, simultaneously impressed and alarmed by how much thought had gone into this.

I went home and immediately filed a Springsteen clause request for Nick Hewitt from the UK Apprentice. I have no interest in Springsteen musically or otherwise, but I do have a weakness for sternish, older men. When my husband stopped laughing, he bagged Nigella Lawson, so – being ever so slightly competitive – I upgraded to George Clooney.

Clooney remained my Springsteen clause until the moment exactly 10 days ago when I was reading the Vogue magazine cover interview with Amal Clooney, in which she made an unsettling admission. When George was wooing her, he would write her lots of amusing emails in the voice of his cocker spaniel, Einstein.

I briefly hoped it was one of those impish pranks for which Clooney ensures he is well known, but alas, no. “I would write letters from Einstein to her, you know, saying ‘I’m being held hostage, and I need a lawyer to get me out of the room,’” he said.

Not that this is a mitigating factor, but Clooney is not alone in this habit. Giving your dog a human personality – usually an annoying human personality, pitched somewhere between a loving, needy preteen and a dad-joking taxi driver – is a thing. A growing thing.

Surveys reveal that one in four pet owners now signs a Christmas card from “Marie, Sean, the kids and Biscuits”, or “Kev, Lisa and The Rt Hon Lord Nipples”. I do like dogs – just not enough that I want to be on the receiving end of greeting cards authored by humans pretending to be one.

A more recent variation on this – one embraced most enthusiastically by women around my age, whose human children have got to the stage where they are beginning to resist all public allusions to the fact that they do indeed have a mother – is to give your pet an Instagram account.

I know more about the dogs – their grooming habits, their outings, their burgeoning friendships – than I do these days about their owners

These women have often come reluctantly to dog ownership, badgered into acquiring one – the classic slobbering Labrador or bounding spaniel; a sensible, photogenic, hypoallergenic, hygienic mix of a poodle and something else; or a rescue dog of indeterminate origin, with peculiar personality tics – by the children, who swore they would take it for walks and train it to do adorable tricks with the help of YouTube. It’ll be good for them, my friends eventually decide. Teach them responsibility and how to rid various types of surfaces of foul-smelling substances.

But then the dog arrives, and proves to be slower on the uptake than suggested by YouTube. The promised cleaning up after the dog happens once, before the children decide carrying poo bags is embarrassing. And so my friends – who find themselves reluctantly thrust back into the familiar frontline of caring for small, messy, irrational, loving creatures, with no clear idea how they ended up here again – deploy the perfect revenge: they give the dog an Instagram account. To help it in its new career as a social influencer, they furnish it with expensive accessories and a rich inner life that includes a neat line in canine puns.

As a result of this apparently growing phenomenon, the handful of Instadogs I now follow includes a sophisticated French bulldog, a sweet sheepadoodle and a tiny mixed-breed “fur baby”, who travels in handbags and likes wine bars. I know more about the dogs – their grooming habits, their outings, their burgeoning friendships – than I do these days about their owners. From the dog, I glean I can about what “the woman”/ “my human”/ “the pawrents” are up to, but mostly, it’s all about the dog.

I’m not much of a dog person, but I do love these people who love their dogs. And apparently, the dogs love them back. They gaze into one another’s eyes and go on adventures together and co-create the perfect sunset photos and share in-jokes, while simultaneously mortifying the children. It’s the relationship that has everything. So despite my firm and unyielding belief that humans, even humans as flawless in every other way as George Clooney, pretending to be dogs is always wrong, I have grown fond of these Instadogs and their miniature sweaters and the terrible, cheesy puns. (You should have carried the damn poo bags, kids.)

Do you smoke or vape? Here’s why Covid-19 means you should quit right now
Real news has value SUBSCRIBE