Sean Moncrieff: ‘Wearing glasses is pretty much the same as smoking crack’ 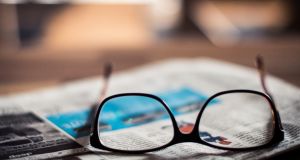 ‘My Jewish History Professor pair were chosen for watching TV and my Ageing Gay Interior Designer glasses I put in the car.’ Photograph: Getty Images

I live with someone who, when I’m driving, likes to commentate on the other drivers and the driving conditions and check whether I’m paying attention to traffic lights, gear changes and whatever she happens to be talking about.

Thus when I sailed past the turn we were supposed to take, a frank exchange of views ensued; and this time I lost the argument even more spectacularly than usual. I had missed the turn because I couldn’t read the sign.

It took a domestic ding-dong to shake my brain into finally accepting that the data coming from my eyes wasn’t as clear as it used to be, and that this had been happening for some time. Once this mental door was kicked in, I noticed that there was so much else I wasn’t seeing well, particularly television, which was like a moving impressionist painting with sound.

For the first time in my life, I needed glasses.

So off we went to get the two-for-one deal at Specsavers. My Jewish History Professor pair were chosen for watching TV and my Aging Gay Interior Designer glasses I put in the car.

And the world revealed itself in newly minted high-definition, especially the television, which had been in high definition all along. Game of Thrones, I discovered, was full of gratuitous nudity. People even said the glasses suited me. But for some time I didn’t carry them on my person; they had specific telly/driving functions that didn’t impinge on my life in general.

My eyes are literally rotting in my head, and behind that, my brain

The photograph that accompanies this column was taken during this period of self-delusion. Because of the default everything-is-grand setting in my brain, I was dizzily unaware that wearing glasses is pretty much the same as smoking crack.

Once you start, your dependency swells until it engulfs your life. Somehow, nature and optometrists have conspired to create a burning need from which you can never escape.

Soon people I know were telling me that they had waved on the street but I had looked straight through them. Because I couldn’t see them. I realised that in any crowded environment I would need glasses to find friends and avoid enemies.

Now that what we laughingly call summer is due to arrive, I’ll have to go back to the opticians to get prescription sunglasses. And when I do they’ll insist I get another eye test and sorrowfully shake their heads at the result because the glasses I got to help my eyesight have actually made my eyesight worse.

But this isn’t the fault of the glasses. It’s time. It’s my brain, protecting me not from the reality of my deteriorating functions, but from the piecemeal decline towards mortality itself. Glasses are the first step on the downward stagger towards the Great Fall. My eyes are literally rotting in my head, and behind that, my brain.

Soon the viability of all sorts of basic tasks – washing, online grocery shopping, karaoke singing – will be completely reliant on access to my glasses; which, in my dotage I won’t be able to find, even though they will be permanently affixed to me via some chain around my neck. And when it’s pointed out where they are, I will promptly forget what I wanted them for anyway.

Instead I’ll sit down to watch a film I have seen before but I won’t recall. I’ll spend a lot of my time pointing at it, yelling ‘who’s he now?’ ‘What’s she doing there?’ until I fall asleep and dribble over myself.

Total overreaction, I know. Plenty of people wear glasses, and their lives are fine. Anyway, she says that I should worry more about cholesterol and after that, my prostate. Whatever that is. And I will. Not now though. Everything is grand.

‘I’ve never dated anyone or had sex. I feel like a failure’
Real news has value SUBSCRIBE