Brian Boyd: We wish him a speedy recovery, but remember Trump has encouraged coronavirus denial

As thousands of Americans succumbed to the virus, Trump continued to be the Pollyana-in-Chief 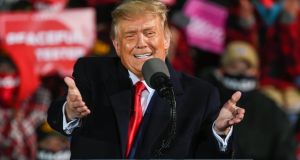 As the news broke overnight that Donald Trump had tested positive for Covid-19, videos emerged on social media of groups of Americans happily cheering the news. Given that the US President’s approach to the virus has oscillated between denial and defiance over the past nine months, many felt that karma had appeared from stage left.

Given that Trump is the latest “Strong Man” politician (alongside Brazil’s President Bolsinaro and the UK’s Boris Johnson) to contract the disease after initially downplaying its severity with macho man style statements, there is more than an ambivalent feeling about Trump’s diagnosis.

Quite obviously the vast majority of people wish Trump, his wife Melania and the White House staffers a speedy recovery from this horrific virus. Aged 74 and overweight, bordering on clinically obese, Trump is at a high risk of complications from an illness that has already killed well over 200,000 of his fellow Americans.

But if the schadenfreude is there, it’s for a very good reason. Most every single statement he has made about the pandemic has been found to be inaccurate and highly misleading if not downright negligent.

Going back to last January, he said “It’s one person coming in from China. We have it under control. It’s going to be just fine”. By February when ordinary Amercians were quickly becoming exposed to the virus he said “It’s going to disappear. It will be like a miracle. It will disappear”.

By March, when deaths began mounting up, he said “We’re doing a great job with it. And it will go away. Just stay calm. It will go away”.

We now know from Bob Woodward’s recently published book that Trump was dissembling. According to Woodward, Trump told him in early February that he knew Covid was a lot more deadly than he was admitting in public and he most certainly knew it was a lot more lethal than the flu.

But at the end of February Trump publicly said “This is a flu. This is like a flu, It’s a little like a regular flu that we have flu shots for. And we’ll essentially have a flu shot for this in a fairly quick manner”.

If he had called for even the most basic of social distancing measures in March, health experts contend that thousands of lives would have been saved.

As thousands upon thousands of Americans succumbed to the virus, Trump continued to be the Pollyana-in-Chief. On May 11th from the White House he said “We have met the moment and we have prevailed”. Over 120,000 Americans have died from the virus since May.

But it is his dumbfounded and dangerous attitude to mask wearing that has severely dented his status as any form of credible political leader. Even in late Spring when the medical community was unanimous in the importance of mask-wearing, Trump said people wearing a mask were just being “politically correct”.

When pressed by reporters to recommend all Americans wear a mask - following sound medical advice and scientific proof that it slows the spread of the virus - he said “I recommend people do what they want. I won’t be (wearing a mask). It’s voluntary. I won’t be wearing one”.

And it goes on: while the death rate from Covid in the US became one of the highest in the world, Trump remained in deep denial. He blamed China, the Centres for Disease Control and Prevention, the World Health Organisation. He talked about a vaccine being ready “very, very soon”. And he continued in his deluded belief that the virus “would simply vanish”.

In this vortex of leave-me-alone libertarianism/authoritarianism he has allowed a virus that affects everyone to become a subject of partisan dispute and he has encouraged a conspiratorial dismissal of a global pandemic.

The sneering at and smearing of the scientific community, the no social distancing, no mask-wearing close contact political rallies - the last one a super-spreader event in Minnesota two days ago: It’s a hubris that best belongs in Greek mythology. But now lies sick in a West Wing bed.

3 ‘Doug and Kamala together are almost vomit-inducingly cute and couply’: The VP’s stepkids speak