Starbucks should be run out of Ireland - never mind Howth

....and they can take their Frappuccinos with them 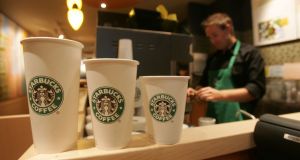 On a purely nutritional level alone Starbucks should be banished. A cup of black coffee contains 2 calories; some of Starbucks’ coffees contain over 500 calories a cup. Photograph: Alan Betson

Inspiring and nurturing the human spirit-one person, one cup, one neighborhood at a time. Such a sweet and sincere Starbucks mission statement. But there’ll be little nurturing of the human spirit done in Howth as the owners of a Starbucks there have been ordered to discontinue its use over a breach of planning permission. It’s not enough to run Starbucks out of Howth, they need to be run out of the whole country.

For a public company trading on the stock exchange, Starbucks likes to think it’s an NGO. It blathers on about “meaning” and “community” while serving up a mass, corporate product. With bad art on the walls and even worse jazz on its sound system, it’s a contemporary Potemkin village of eco-friendly, metropolitan affluenza. And they have the cheek to call the hot black water they sell “coffee”.

It’s McDonalds for the middle classes, a weird corporate cult with its own makey-uppy language (Frappuccino?). The Stepford smiling staff are like hipster Scientologists; they want to know your name so they can write it on the cup because you’re not just buying a cup of coffee, you’re entering into a partnership with them where you journey together to Fair Trade Coffeeland.

In their landscape of sameness, Starbucks sell vowel-laden, sugar-ridden concoctions as symbols of sophistication and discernment. Soft furnishings, wi-fi, bumper sticker environmentalism all with a narcoleptic Norah Jones soundtrack - it’s 21st century civic life out out of a flat pack box.

It’s a sleight of marketing hand that has made Starbucks a Wall Street favourite. And you’ve just given them money so they can expedite the process of you exceeding your daily recommended sugar allowance.

Despite your surrounds and and the faux-Italian naming system, you are not in fact in the Palazzo Vecchio in Florence. You’re on Lower Liffey Street.

“Starbucks stands for predictability, class standing, a sense of community, more natural and authentic products, and a sense of their customers as caring and more benevolent individuals” writes Professor Bryant Simon in “Everything but the Coffee: Learning about America from Starbucks”.

Simon spent five years visiting 450 Starbucks branches in ten countries to come to the conclusion that “Companies such as Starbucks no longer sell products, at least not principally; they sell experiences. That is what we pay for - we pay extra for things that makes us feel better and look better, things that communicate something about ourselves and meet our personal and collective desires”

Our sense of communalism and association are so fractured that any company that promises not just a product but a concomitant lifestyle enhancement (Starbucks, Apple etc) we will invest in not just financially but emotionally. It can’t be coincidental that companies who claim to sell us not just phones or cups of coffee, but “experiences” are also the companies who might well agree with the Leona Helmsley view that “only the little people pay taxes”.

On a purely nutritional level alone Starbucks should be banished. A cup of black coffee contains 2 calories; some of Starbucks’ coffees contain over 500 calories a cup. Have a latte and a muffin and depending on your gender you’ve already used up half your recommended daily calorie intake.

Some Starbucks drinks have as many as 25 spoonfuls of sugar in them. In response to criticism the company says it is committed to reducing the sugar content in some of its drinks by 25% before the end of 2020. In four years time we can look forward to just the eighteen spoons of sugar in our Starbucks drink.

There was a time in the 1990’s before the corporate schtick ran thin that people used to lobby for a Starbucks in their area. The worst crime purported “cool” can commit is to go mainstream and Starbucks became banal and ubiquitous to the extent that people now lobby to keep them out of their area.

Worse still, Starbucks now pretend they aren’t who they really are. Back in 2009, the company debuted a series of “Stealth Starbucks” outlets. These are coffee shops debranded of any mention of their name. They appear to be your standard small, independent coffee shop except if you look at the small print close enough you will see the give-away line: “inspired by Starbucks”.

Once the jig was up on that peculiar stunt, the company then decided to go after people with more money than sense. The new “Starbucks Reserve” concept is high-end coffee shops catering for the demented out there who believe “coffee is the new wine”. There’s one in Covent Garden, London which sells “reserve espressos”, its menu tantalisingly reveals that the “Peru Bagua Grande coffee offers medium acidity and body, floral aroma along with notes of candied lemon and chocolate”. It would make you shed a nostalgic tear for a jar of Maxwell House.

But the one hilarious thing you need to know about Starbucks is how scared they are of entering the Italian market. There are numerous Starbucks branches in Portugal, Spain, France, Switzerland etc. There are zero in Italy. The company even decided to open up in Cambodia, Azerbaijan and the Forbidden City in Beijing ahead of opening in its spiritual home.

Starbucks CEO, Howard Schultz got the idea for exporting and franchising Italian style coffee shops tailored for the North American market after a visit to the country in the 1980’s. All those Italian names in Starbucks and calling their biscuits “biscotti” are supposed to exude continental sophistication but are about as authentic as an Irish bar would be in El Paso, Texas.

Italy is the last place in the developed world without a Starbucks as the company won’t risk being rejected by the place that inspired it. You can get a damn fine espresso anywhere in Italy for €1; a bucket of beige liquid with marshmallows floating on top of it might not cut it there.

Starbucks say they hope to open a branch in Milan in 2017, but will only do so “with humility and respect”. No need to build a new one, there’s one in Howth you can pack up and bring with you.