Brian Boyd: Have I got fake news for you

Just like previous efforts to police the internet, the clampdown on fake stories will fail 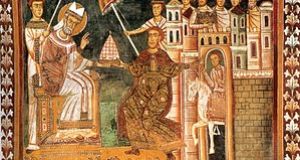 Fake news has been around as long as humans have. The first notorious use of it was when the Christian Church in the 8th century brought out the document “The Donation of Constantine”

It’s something everyone in the country looks forward to: at the end of the RTÉ One 9pm news bulletin on Christmas Eve, the broadcaster informs us “we can now confirm that Santa has left his workshop and is beginning his long journey around the world to deliver his presents”.

Over-excited children can be put to bed without quarrel.

This year though, RTÉ will have to caption their Santa news story with a “Fake News” alert.

A red warning sign will read that the news of a white-bearded man journeying around the world, in such a short space of time, has been “disputed by third-party fact-checkers”.

The existence of Santa Clause is, of course, indisputable but a moral panic has set in about fake news.

It feeds on the fears such as the possibility that teenagers in a bunker in Montenegro, writing stories that Hillary Clinton heads up a Satanic child sex ring from the basement of a pizzeria in Washington DC, may have undermined Western democracy.

It has massive tech companies – such as Facebook and Google – scrambling on the “moral obligation and ethical standards” front (never a good look on a corporation) and promising to clamp down on fake news stories.

We’ve been here before though and what have we always learned? That you can’t police the internet and you can’t legislate against people’s stupidity.

And isn’t that the working definition of insanity? Doing the same thing over and over again and expecting a different result.

Fake news has been around as long as humans have.

The first notorious use of it was when the Christian Church in the 8th century – in a naked power grab – brought out a fake news document known as The Donation of Constantine.

But given that, politically speaking, 2016 seems to have been written by The Onion (the satirical site), fake news is now in the interrogation chair and having a bright light shone in its face.

This genie is not going back in the bottle.

The stated plans to flag up fake news stories as “disputed” won’t work. People will only flock to the “disputed” stories to join in the ruck – given the attraction of finger-pointing and name-calling to many these days.

Study after innumerable study has found that even if fake news is categorically disproved, a certain amount of people (hyper partisan or not) will still continue to believe it.

The handy opt-out clause here is that “it’s all part of the cover-up”.

You only have to look at how many people today still believe in the disgraceful 1903 anti-semitic document The Protocols of The Elders of Zion.

Drawing attention to fake news stories will only have the same effect as placing “Parental Advisory” stickers on music CDs did in the 1990s.

Then, two versions of an album were released – one cleansed of all lyrical uses of explicit sexual imagery, and one with all the naughty words left on.

Take a wild guess as to how the sales figures for the two versions panned out there.

His lawyer’s defence? Poor Dylann read fake news on the internet that black people were going to rape and kill all the white people so that’s why he acted as he did.

Will the moral panic about fake news now make it a mitigating factor?

If the assertion is that fake news stories such as Pope Francis endorsing Donald Trump as president helped him win US election, then we need to walk away from fake news (the symptom) and walk towards the cause.

A healthy sense of scepticism, an open and enquiring mind, a developed sense of humour and a bracing dose of common sense will inoculate you for life against this online disease.

Forming your own opinions and arriving at your own conclusions will offer added protection.