Stephen Collins: Coalition still has time to get act together

If Government weathers Leaving Cert error storm, this could be turning point 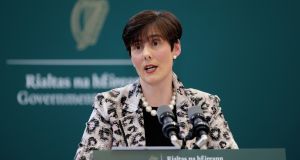 Minister for Education Norma Foley: Coalition must work together to resolve the Leaving Cert problem, as greater Covid and Brexit challenges wait around the corner. Photograph: PA

It seems this Government just can’t catch a break. Just when things appeared to be settling down after a very rocky first three months along comes the Leaving Cert debacle to create more confusion and further undermine public confidence in the Coalition’s ability to govern.

There were predictable expressions of outrage from the Opposition blaming inexperienced Minister for Education Norma Foley for the fiasco. While it was difficult to pin responsibility on her for the computer error that caused the problem, she was attacked for not making an announcement immediately the error was discovered a week ago.

If these were normal times, the Minister might get a fair hearing for her explanation that it took some days to establish the scale of the problem and how many students had been affected. Unfortunately for Foley and her colleagues in the Government, politics is far from normal on a whole variety of levels.

The fundamental problem facing the Government is that it has lurched from one political disaster to another from the day it took office. Some of the wounds have been self-inflicted while others come under the unpredictable category of “events”. They have combined to create serious doubts about the ability of the Coalition to function in a coherent fashion.

One thing the Government does have going for it is that there is no obvious alternative waiting in the wings, as the five months of political stalemate after the general election proved. Another election, if one were even possible in the middle of the pandemic, would not give a markedly different result and nobody really wants one in the short term.

That should give the Coalition, despite all its problems, more time to get its act together. One of the problems it has had since taking office is that bonding between Ministers and advisers of the different parties has not taken place in a way that normally happens in the early days of a coalition.

Covid has played a large part in that process as it has enforced distancing between Ministers who regularly have to go into self-isolation, either as a result of coming into contact with someone who has tested positive or because they have been abroad on official business. There is also a palpable lack of warmth between Leo Varadkar and Micheál Martin and, just to make matters worse, Simon Coveney has been in a dark mood over his treatment by both of them over his thwarted ambition to replace Phil Hogan as European commissioner.

Relations between ministerial special advisers which are vital to the functioning of a coalition have failed to develop, partly because of Covid and partly because of the chaos in government. In previous coalitions, advisers and press officers held weekly meetings so that they could keep their ministers informed about what was happening across government and flag potential problems. That does not appear to be happening in this coalition.

On the positive side, though, the second tier of Fine Gael and Fianna Fáil Ministers are, by all accounts, beginning to bond. That process has been helped by the close relationship between Paschal Donohoe and Michael McGrath. The two men got to know each other very well over the past few years during the confidence-and-supply arrangement between Fine Gael and Fianna Fáil. That has enabled them to work together in government on a basis of trust from the very beginning.

Given the huge decisions on the public finances that will be required in the coming years, once the Covid-19 pandemic has passed, that relationship will be vital not simply for the cohesion of the Government but for the future of Irish politics. In the longer run, Fine Gael and Fianna Fáil will have to develop a close working relationship if they are to have any chance of fending off the challenge of Sinn Féin and the hard left to replace them in government.

A silver lining to the Leaving Cert disaster is that nobody else in government is blaming Norma Foley for it. In fact, she and Simon Harris have been working closely together in recent days to cope as best they can with the fallout and ensure that the third-level system can adapt to the implications of dealing with up to 1,000 more students than they had planned for.

In government, there is no avoiding an inevitable series of crises. It is how these crises are dealt with that ultimately determines whether a government is successful. If the Coalition can weather the storm over the Leaving Cert mistakes, it could actually prove to be a turning point in relations between the parties.

Strong bonds will be necessary to cope with the even bigger problems that will arise in the months ahead. Brexit will be an enormous challenge if there is no trade deal between the EU and the UK as the implications for the Irish food industry will be horrendous. Even if there is a deal, it will generate serious problems for trade and political headaches about the operation of the Irish protocol.

Overriding all is the continuing challenge of Covid-19 in which a fine balance will have to be struck between public health and the health of the economy.