A very American coup: Is a ‘deep state’ targeting The Donald?

A discussion between the President and his aides, including Steve Bannon, in the Oval Office has been captured on camera by CNN. Sources for the news station said that the focus of the meeting was on the handling of the Jeff Sessions issue, in which the Attorney General was found to have met with Russian diplomats during the election campaign. Video: CNN 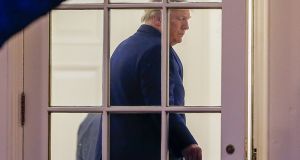 Donald Trump: Disproves the theory that just because you’re paranoid doesn’t mean they’re not out to get you. Photograph: Erik S Lesser-Pool/Getty Images

Time was when you only ever heard about the “deep state” from men in donkey jackets selling copies of the Socialist Worker newspaper in pubs. Along with shibboleths such as “the commanding heights of the economy” and “cultural hegemony”, a paranoiac belief in the deep state was the inalienable possession of the Left.

In 1988, Irish actor Ray McAnally gave a remarkable Bafta-winning performance as a hard-left British prime minister who goes toe-to-toe with the deep state in the Channel 4 drama A Very British Coup. Appalled by this socialist who takes the UK out of Nato and declares unilateral nuclear disarmament, a fabled sinister shadow government of the military-industrial complex, intelligence agencies, plutocrats/oligarchs, mainstream media and armed forces organise a coup d’etat.

In 2017, in the still unfolding A Very American Coup, the far-right Breitbart news website takes the wheel and runs with stories claiming Barack Obama has been encouraging a “Deep State Coup Against Trump”.

Just as the hard left once evoked the deep state to maintain their virtuosity and blame everyone else for everything that went wrong, the far right has now discovered its magical conspiracy theory properties.

Breitbart may be the National Enquirer of political journalism, but its fixation with a big, bad, deep state out to get Donald Trump directly led to the president’s Saturday’s tweetstorm , in which he alleged that “Obama was tapping my phones during the election process”.

White House officials told CNN that Breitbart’s “Obama in Deep State Coup” story was “circulated at the very highest levels” in the White House, blipped on Trump’s radar and “infuriated him”.

The Washington Post reported that chief strategist Steve Bannon (who once ran Breitbart) “has spoken with Trump at length about his view that the ‘Deep State’ is a direct threat to his presidency”.

Breitbart staffers are no doubt high-fiving each other for coming up with the neologism “DeepStateGate” to refer to a constellation of events that have hobbled the Trump administration since inauguration day.

The dossier has been somewhat sexed up: there were the “illegal leaks” from the FBI and other intelligence agencies that led to the firing of National Security adviser Mike Flynn. Leaks about a Trump executive order to reopen CIA “black sites” (basically, torture cellars) provoked such hostility that the idea had to be dropped.

The more swivel-eyed loons among the American right are stating that the deep state (now abetted by Obama and fellow traveller liberals employed across all agencies) is determined to have Trump “removed” because he favours detente with Russia. The military-industrial complex, by contrast, is intent on Cold War II: Let’s Finish the Job.

Clinical psychologists would put this belief in a deep state close to the 9/11 truthers and UFO nutcases on the “everyone is out to get me” spectrum of delusion. That Breitbart is pouring this paranoia, Iago-like, into Trump’s ear is a classic diversionary ploy to protect him from the banal and disquieting truth.

As the Los Angeles Times put it: “Trump’s problem isn’t the deep state; it’s the broad state. He’s facing pushback not only from intelligence agencies, but from civilian bureaucracies too.”

Hell hath no fury like a career civil servant told to shape up or face the sack. This is precisely what the White House press secretary, Sean Spicer, publicly warned state department officials over their “dissent” on the Muslim travel ban – “they should either get with programme or they can go”.

Newt Gingrich says President Trump “may have to clean out the justice department because there are so many left-wingers there”. He added, ominously, that Trump might call for civil service revisions to make it easier to sack federal workers.

Maybe it is down to Trump’s abrasive, aggressive management style. Or maybe it is the belief that some of his orders are unconscionable. Or maybe they just believe in the sanctity of their jobs-for-life. But the pushback among civil servants and high-level career bureaucrats is the real reason the White House leaks like a sieve, and why Trump has met such unprecedented levels of resistance from within his own federal agencies.

Donald Trump didn’t cut his teeth making political deals, keeping people sweet and telling them what they want to hear. He is a stack ’em high, sell ’em cheap businessman who is now realising you can’t hire’n’fire the whole executive branch of a federal government for back talk.

The deep state isn’t out to get Trump. But thousands of deeply pissed-off civil servants are.