Sanders is an astute, effective politician who understands power and can achieve the impossible 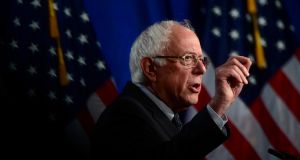 US presidential candidate Senator Bernie Sanders delivers a speech to defend his support for a sweeping “Medicare for All” healthcare plan at George Washington University in Washington, File Photograph: Erin Scott/Reuters

At the end of May 2017, Bernie Sanders made a trip to western Europe, where he spoke to sold out crowds in Berlin and at the Dalkey Book Festival. In between his visits to Germany and Ireland, he toured England, addressing large and enthusiastic crowds in Brighton, Cambridge, Oxford and London.

In question and answer sessions, those English audiences asked Sanders to address what was for them the most obvious and urgent political question: the British general election that was coming on June 8th, in which another old socialist, Jeremy Corbyn, was surging from the fringes of politics to the concrete possibility of state power.

But they were disappointed. As Sanders explains in his 2018 book, Where We Go From Here: “During my stay in the UK I was asked time and again about my views on the election. While I strongly supported Labour and was very impressed by the grassroots activism I was seeing, I didn’t think it would be a help to them to have an American getting involved. So I politely demurred comment.”

This is rather disingenuous. Sanders was by then a huge political figure. He had harvested an astonishing 13 million votes in the 2016 Democratic Party primaries, raised nearly a quarter of a billion dollars in small contributions from supporters and come close to taking the nomination from the supposed shoo-in candidate, Hillary Clinton.

This was a feat almost as remarkable as Donald Trump’s insurgent campaign on the Right. Trump, after all, was a billionaire and, because of The Apprentice, a nationwide celebrity. Sanders was an obscure independent senator from the tiny state of Vermont.

Sanders had the aura, not just of the underdog who had rocked the system, but of the man who would have saved the world from Trump

In What Happened, her memoir of the 2016 presidential campaign, Clinton sums up both the bewilderment of the Democratic establishment and the grudging admiration that could not be withheld from Sanders: “I admit I didn’t expect Bernie to catch on as much as he did. Nothing in my experience in American politics suggested a Socialist from Vermont could mount a credible campaign for the White House. But Bernie proved to be a disciplined and effective politician.”

By the time of Sanders’s English tour, moreover, Clinton’s defeat had cast an ever brighter retrospective glow over his 2016 campaign. At least on the Left, the idea had taken hold that Sanders would have beaten Trump, especially in the crucial midwestern states whose electoral college votes had given him victory. There is some polling evidence to support this but it is, of course, an unprovable proposition.

Nonetheless, Sanders had the aura, not just of the underdog who had rocked the system, but of the man who would have saved the world from Trump.

So of course a Sanders endorsement of Jeremy Corbyn and Labour would have been “a help to them”. To suggest that we withheld it because Corbyn would not have gained from it is taking false modesty to incredible extremes.

The truth is that Sanders’s polite demurral tells us more about him than he lets on. Firstly, it shows just what an astute and disciplined politician Sanders really is. His eye was on the prize of the 2020 presidential election, when he would again try to storm the Democratic Party, take the nomination and finally put to the test the idea that he could indeed beat Trump.

And he instinctively judged that tying himself irrevocably to Corbyn, on videos that could be sliced and diced by his opponents in the US, was not a good idea. Second, it reminds us that seeing Sanders as the American Corbyn is not a good idea either.

The analogy is now a very common one, especially among US progressives who like Sanders’s main ideas but fear that, like Corbyn, he will crash and burn in a contest with a larger-than-life right-wing populist.

There are two overwhelming differences between these 70-something socialists. The first is power. The biggest problem with Corbyn is that, before he became Labour leader, he showed no real appetite to hold and wield power by taking public office. He got a safe Labour seat and stayed in it, putting his energies into protest movements but never looking to serve in cabinet when Labour was in government.

Sanders could not be more different. He has spent, to date, 49 years – almost half a century – seeking public office. He started out quixotically, running for the Senate in 1971, for the governorship of Vermont in 1972, for the Senate in 1974, and for governor again in 1976, all for the tiny Liberty Union party.

He retired from politics for five years, disillusioned by his derisory levels of electoral support. And then he came back in 1981, not as Don Quixote, but as a hard-nosed realist. What he realised was that if he wanted power, he had to start at a much lower level.

He got elected as the mayor of Burlington, a city the size of Dundalk. And he spent eight years at it, learning how to run things, how to make change happen, how to expand his support base. Then he moved, step-by-step, up the ladder of power: from mayor to congressman, from congressman to senator, from senator to viable presidential candidate. That does not look at all like Corbyn’s trajectory.

The second big difference is party. Corbyn and his allies were obsessed with controlling the Labour Party machine – at times more so than with actually winning an election. Sanders eschewed party machinery altogether.

He created his own support base and, crucially, has continually expanded it outwards, from a small city, to state-wide office, to national prominence. It continues to expand: Sanders’s victory in the Nevada primary this week showed him making serious inroads with Latino and African-American voters. What used to be his great limitation – his lack of a party structure – has become his great strength. It has allowed him to create an organic, open-ended movement.

None of this means that Sanders would surely beat Trump, or that concerns about his age, his health and his socialist brand are invalid. He would be an immensely risky candidate. But he is not Corbyn. He is a terrifically astute, superbly effective politician with a very deep understanding of how power works and a record of achieving the impossible.

As Clinton ruefully acknowledged, you don’t beat Sanders by underestimating him and linking him to someone as politically inept as Corbyn is a way of doing just that. Sanders is now on course to be the Democratic nominee. If they want to stop him, his rivals have to learn very quickly to understand exactly why he is so formidable.