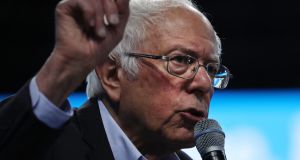 Bernie Sanders has emerged as the clear frontrunner to be the Democrats’ presidential nominee this fall. He won the first three contests, the most recent one in Nevada by a thumping margin. Even assuming he loses the primary today in South Carolina (one of the states least hospitable to his message), Sanders would remain very well positioned to emerge from the coming Super Tuesday primaries with a clear lead in delegates to the party’s convention.

Sanders has proven his mettle as a campaigner, remains a popular figure among Democratic voters, and fares well in polls that pit him directly against Donald Trump as the party’s nominee. He has assembled an enthusiastic coalition of supporters across nearly every demographic category. So why are so many party and media elites panicking about his success?

Well, the one demographic category that doesn’t like Sanders is drastically overrepresented among such elites: university-educated Americans over the age of 60. Such Americans, who remember the Cold War and have accommodated themselves to the decades-long rightward drift of American politics, can hardly imagine how a self-declared socialist could make a credible challenger to Trump. Stuck in the conventional wisdom of the past, they overlook the political transformations of the past decade. If Trump’s presidency should have taught them anything, it’s that the rules of the game have changed.

I had thought that the Democratic contest would come down to a battle between a genuine candidate of the left-Sanders or Warren-and one who like Obama in 2008 could rhetorically appeal to the left while assuring elites that she posed no real threat to them. But I was wrong. Actually, Democratic elites and their moderate supporters never assimilated the lessons of the 2016 election. Accordingly, they have put up a range of candidates none of whom so far has been able to seriously challenge Sanders: a doddering retread whose only appeal is to turn back the clock to the Obama era (Biden); a political neophyte trying to follow the old Obama playbook but with next to zero support from non-whites (Buddigieg); a little-known Senator with moderate policies but a vicious temper (Klobuchar); and most absurdly of all a charisma-challenged plutocrat who thinks he can buy the presidency by spending hundreds of millions of his own money on television ads (Bloomberg). Meanwhile, Warren, who offers a more palatable left-wing candidate for party elites, has failed to attract considerable support: her campaign has struggled to reach beyond educated middle-class voters and party elites have proved unwilling to embrace her as the lesser evil to Sanders.

Despite the many flaws of Sanders’s opponents and his own considerable strengths as a general election candidate evident in any objective measure, expect now to see an avalanche of mainstream voices questioning his ability to defeat Trump. Yet, though articulated in the language of ‘electability,’ it is what Sanders represents that truly frightens party elites. It’s not only that Sanders breaks with the Democrats’ decades-long neoliberal policies. It’s that he has assembled a movement not beholden to party elites. Sanders has funded his campaign through millions of small donations by individuals (as has Warren). Thus, he is not dependent on the money of the big donors who have controlled the party. He represents a direct threat to the “billionaire class” that has dominated American politics in both parties.

The resistance to Sanders among older well-off but hardly billionaire Americans can also be largely explained in material terms. Medicare for All? They already have it or have private health insurance. Free public university tuition? They long since graduated and so have their children. A Green New Deal? They’ll be dead before the worst of the climate catastrophe hits. Meanwhile, such programs will take money and that will mean higher taxes.

For Sanders, the key now is continuing to rack up impressive victories. In the short term, this will avoid a potential disaster where he wins a plurality but not a majority of delegates and party elites seek to deny him the nomination at the party convention. But electoral success can also help clarify matters for those who are afraid of Bernie. If he wins a decisive victory, they will be more likely to see that the strength of his movement is no fluke.

Come the election in November, they would be forced to decide whether a socialist promising universal health care, a Green New Deal, and a shift away from oligarchs’ control ofUS politics, economy, and society is less preferable to the racist, sexist, xenophobic, and disgraceful presidential incumbent. For if Sanders is the Democrats’ candidate, the status quo ante won’t be on the ballot in 2020.

In the words of Bob Dylan, Bernie’s Democratic detractors would be forced to recognise:

Your old road is rapidly agin’

Please get out of the new one

If you can’t lend a hand

For the times they are a changin’

1 Coronavirus: Death rate from Covid-19 in Ireland rises to 2.4%
2 Netflix: 10 of the best new shows and films to watch in April
3 Coronavirus in Ireland: New powers of arrest for gardaí expected to come into force
4 Tony Holohan admitted to hospital after feeling unwell during coronavirus briefing
5 ‘On the bike I meet no one’: 78-year-old cyclist refuses to cocoon
Real news has value SUBSCRIBE