Like the coronavirus, the euro zone must adapt or die

Politics, not the pandemic, risks killing the European Union project 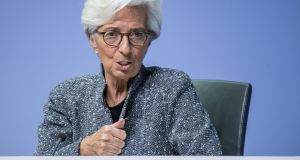 From the top floor of the European Commission headquarters in Brussels it must look like all of Europe is burning. A public health crisis that targets the most vulnerable in society, a global pandemic, member states scrambling to prevent their economies collapsing, closed borders (definitely a Brussels obsession) and mounting social anxiety.

Literally, it couldn’t get any worse than this. Could it?

The reality is that in the short term it will. Mortalities will increase significantly, social restrictions will remain. Millions of people will lose their jobs in the coming weeks. Financial market volatility will worsen and we’ll probably get even more obsessed with daily infection rates and that Johns Hopkins University interactive map.

But looking beyond the fire something else is slowly emerging. Because for the first time in decades all European Union member states are simultaneously embarking on massive public spending programmes to protect their economies. For those in the euro zone, this is coupled with a looser than loose monetary policy that highlights the scale of the problems ahead. The promised land of the European Central Bank, the EU and national governments joining hands and screaming “Show me the money” appears inevitable. Even the Americans are getting ready to blow conventional economic theory out of the water.

The EU’s member states have managed – in just 10 days – to display more fiscal vigour than in the preceding 10 years. Funny how a global health crisis can concentrate the mind and loosen the wallet of even the most parsimonious of the frugal five.

But – and many in Brussels don’t yet seem to realise – rolling out massive public spending to prevent economic collapse is the easy part. The really hard part for European politicians is about to begin.

Because what the EU really needs is a coherent recovery strategy that safeguards the euro, protects the banking system and puts a floor under the economic contraction. Europe requires a combined (and at least semi-co-ordinated) monetary and fiscal expansion that will need to be bigger, and last longer, than policymakers currently appreciate. This isn’t the economics of the Greek crisis or even the oil crises of the 1970s, it’s more akin to the realities of 1918 or 1945.

And this is where Brussels needs to take a leading role. It’s also where the real dangers lie.

In truth, just like a wayward teenager, Europe’s destructive economic tendencies are already resurfacing. Even in the midst of this economic chaos, member states can’t agree to deploy the European Stability Mechanism (ESM) to backstop euro-zone economies. Economic lessons seem to be slowly learned in countries where dogma has long replaced economics as a basis for fiscal policy. Remember when Lehman Brothers was just an American problem?

The second danger is that the Macronistas will view this crisis as the opportunity they’ve been waiting for. A situation where, for them, a bigger Europe is the answer to every conceivable coronavirus-related problem. And while elements of this approach will be needed in the coming months it should not become the natural starting point. It’s one thing to bend state-aid or competition rules in an unprecedented crisis, it’s quite another to launch an economy-wide nationalisation programme. Centralisation never solved everything on its own, not even in France.

But the biggest danger facing Brussels is that the EU will appear to be strangely irrelevant in the important economic dogfights prevailing all around them. Because it is the national capitals that are attempting to calm anxious workers, to hold healthcare systems together and vainly reassure nervous financial markets. It is the ECB that’s trying to hold the euro zone together. And it is China that seems to be offering more real support to Italy than the rest of the EU combined. In this context, the EU’s actions to date appear strangely secondary to the reality of the widening crisis that is radically impacting on people’s lives.

The EU and the euro zone, much like the coronavirus, must simply adapt or die.

To overcome these dangers the EU needs to act quickly and decisively. No more political grandstanding or ridiculous arguments about uncertainty and sequencing. Amid the suffering of the coronavirus the pieces have fallen into place for a flexible and unprecedented expansionary economic response. The ECB has once again shown the way. The ESM should be immediately deployed, banking union completed and the actions of national governments combined with ECB policies for the highest impact possible. Euro-zone politicians must simply step up or step off the stage.

The EU won’t survive this crisis intact without political leadership at a European level. The only alternative is a return to the petty political infighting and economic stagnation of the past decade. This would dramatically increase the likely fragmentation of the euro zone and the weakening of the EU at every strategic level. That’s why it’s the politics of the crisis, not the coronavirus itself, that risks killing Europe.