Zoom and Bloom: How I tried to fill Pete Buttigieg’s shoes on Bloomsday

Frank McNally: On a Ulysses talk that brought him virtually from Phoenix Park to New York 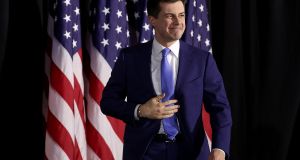 Ex-Mayor Pete Buttigieg sent a nice letter, regretting his inability to attend and praising Joyce as “the great epicist of the everyday”. Photograph: Win McNamee/Getty Images

I spent most of Tuesday worrying about a transatlantic Bloomsday talk I had to give later, via Zoom.  It was for the Irish American Bar Association of New York (IABANY). And as usual, I was regretting the character weakness that had led me to accept the invitation. But I had been the victim of flattery by event organiser Janet Walsh who, apologising for the short notice, admitted frankly: “We were trying to get Pete Buttigieg”.

In case readers have forgotten the world before coronavirus, I’ll remind you that as recently as February, “Mayor Pete” was front-runner to be the Democrats’ presidential candidate. However briefly, the dizzying prospect arose that Donald Trump might be replaced in November by a man who has read Ulysses. And not just read it, but who calls it the book that has most influenced his life.

In more recent years, even while mayor of South Bend, Indiana, he took time out to serve as a navy reserve lieutenant in Afghanistan, where he was part of an intelligence unit, disrupting terrorist finance networks.  Annoyingly, he’s still only 38.

I looked all this up while wondering what to put in my own one-paragraph bio, as requested by the event organisers.  It didn’t help.

The subject of my talk was the Phoenix Park Murders of 1882, as mentioned in Ulysses, but with specific reference to the discreet memorial – a cross cut into the grass – that has marked the spot, more or less continuously, for 138 years.

This tied in with the IABANY’s general theme of justice. It had featured too when, in happier times, the late Adrian Hardiman gave the talk in New York’s Supreme Court building in 2012. But it also touched on a current hot topic, the war on statues, and questions of who should and should not be commemorated.

It’s extraordinary how, for so many of us who hadn’t heard of it three months ago, Zoom has now become a routine domestic convenience. Even so, it still felt downright weird to be addressing an audience of New York lawyers from my Kilmainham kitchen, at midnight (or nearly).

It was a doubly strange because, based on a draft script, a woman called JaneAnne Murray – a law professor in Minneapolis – had added a slick PowerPoint presentation, possibly from her kitchen, which I watched like everyone else.  Anyway, it seemed to work. At one stage of the talk I found myself thinking: this is actually interesting.

Ex-Mayor Pete sent a nice letter, regretting his inability to attend and praising Joyce as “the great epicist of the everyday”.  That’s certainly true of Ulysses, which follows its characters from breakfast though to bedtime. But one of the points I made on Tuesday, because of its relevance to Phoenix Park, is the contrast between Ulysses and Joyce’s other epic, Finnegans Wake.

Whereas the former is a book of the day, the latter is of the night, with its characters all asleep or dead. And apart from mention of the murders there, Phoenix Park is conspicuously absent from Ulysses, whereas Finnegans Wake is saturated with it.

It’s as if Joyce thought of the park as a place of dreams and nightmares.  If so, Winston Churchill might have sympathised.  He spent childhood years in the grounds of the Viceregal Lodge, hearing scary stories from his nanny about the Fenians.

From an Irish viewpoint then, the park must have been synonymous with the British army, which has left its bootprints on everything from the Magazine Fort to Military Road. The British presence also explains one of its most colourful place names. “Khyber Road” is the narrow, tree-lined route that leads up from Islandbridge to the Papal Cross.  Back in colonial times, it must have had a fanciful similarity to the notorious tribal mountain pass in British India.

People might remember the Dublin version from a much-circulated photograph a few years ago, in which a startled deer took a short cut through a cycle race – or, more exactly, through a cyclist – there. But the road is also popular with runners, who use it for 400-metre uphill repeats.  I’ve done multiple ascents of the Khyber myself over the years, oblivious to the dangers.  When I think about it, Pete Buttigieg and I have a lot in common.

1 Covid-19 incidence in the Republic set to surpass that of UK
2 Coronavirus: Non-essential travel from US set to be banned within days
3 When will the first Covid-19 vaccine be used in Ireland?
4 ‘Our hearts are broken’ – implications of fresh lockdown sink in
5 Taoiseach tested twice for Covid-19 but excused quarantine after Brussels trip
Real news has value SUBSCRIBE