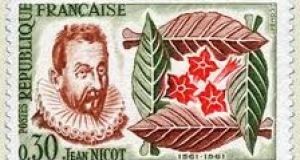 A stamp commemorating Jean Nicot de Villemain, a 16th-century diplomat who brought tobacco to France and recommended its medical use

A minor but instructive detail in the killing of George Floyd was the surname of the police officer chiefly involved. Derek Chauvin is in part the namesake of a Napoleonic soldier, Nicolas Chauvin, a man who inadvertently gave us the word chauvinist, although there is some doubt about whether he ever existed.

He may just have represented a type. And his unthinking loyalty to the army was not considered a bad thing then. Part of the legend is that Napoleon awarded Chauvin a sword of honour and a pension for his zeal. But in intervening centuries, chauvinism of all kinds, especially male, has earned a bad name.

The violence of the French revolution forged several new words in English, most infamously guillotine, named not for its inventor but for the man who championed it as a humane alternative to existing methods of execution. Dr Joseph-Ignace Guillotin was himself opposed to capital punishment, so the eponym was a mixed a compliment.

Some history books suggest we also owe the term bigot to those turbulent times, via Napoleon’s minister for religious affairs, Félix Julien Jean Bigot de Préameneu. But that seems to be a horse-after-cart scenario.

The word’s derogatory usage long predated him, going back to the middle ages. That and the fact that in Joan of Arc’s time, the English were known in France as “goddamns”, after their favourite oath, has led some etymologists to argue that bigot might have been a version of “by God”. In any case, in its oldest known French sense, it was a term of abuse for Normans. It may be worth noting that Napoleon’s religious affairs minister, no fanatic himself by all accounts, was a Breton.

Today, apparently, marks the 100th anniversary of an obscure event in American politics remembered now only for a phrase it spawned. The event was obscure even then, in fact, and in more ways than one.

That was the whole point of the phrase, coined by a reporter named Raymond Clapper to describe the mysterious process by which Warren G Harding was chosen as Republican candidate for the 1920 US presidential election. With the convention deadlocked, party power brokers went into private session at their Chicago hotel. As Clapper put it, Harding was chosen “in a smoke-filled room”. One of the great political clichés was born.

There, by the way, lurks yet another eponym of French origin. Nicotine, the drug that long fuelled politics, especially at late-night meetings in back rooms, is from Jean Nicot de Villemain, a 16th-century diplomat who brought tobacco to France and recommended its medical use.

It’s funny that French has given English so many such names historically, without even trying. This contrasts with the attempts of official bodies in France today, notably the Commission d’enrichissement de la langue française (“Celf”), to resist the domination of English, especially American-English.

I read somewhere recently of Celf’s doomed attempts to get French people to say “mot-dièse” instead of “hashtag”. Other lost causes include the promotion of “frimousse” rather than “smiley”, and “informacion fallacieuse” instead of “fake news”. Unfortunately for its guardians, language is notoriously democratic. Faced with official promotion campaigns, the typical popular reaction is to – what’s the word? – boycott.

That last eponym took off during another period of turbulence, the Irish Land War. And its overnight success was odd because there was no obvious vacancy. English already had the expression “to send someone to Coventry”, which although vague in origin, meant the same thing. And there was also the verb to ostracise, which had become roughly equivalent.

In its original, ancient Greek sense, ostracism may have been the blueprint for many of today’s reality TV shows. Every year, the people of Athens were asked, essentially, if anybody in public life was really annoying them. If enough people said yes, a second round of voting followed, in which the names of nominees were scrawled on shards of pottery, or ostraka.

If a candidate won enough votes, he (it was usually he) was expelled from the city for 10 years. There was no other punishment unless he returned early, in which case it was death, although he could also be invited back ahead of time, if opinion changed.

In a separate but similar system, certain individuals – usually soft targets, such as slaves or convicts – could be expelled periodically as scapegoats, to bring the city’s bad luck with them. The word for such a person, pharmakos, has been lost to English except in pharmacy, with which it shares roots.

As for the concept, it is now officially extinct, although since scapegoats were typically chosen in times of crisis, including plague, Covid-19 may yet inspire a revival.