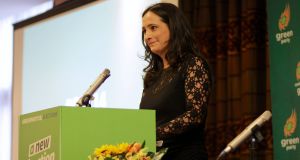 The name of Catherine Martin’s department will be a big challenge for journalists, if only because its name cannot be reduced to an acronym. Photograph: Nicolas Bernier

The new government department of Media, Tourism, Arts, Culture, Sport, and the Gaeltacht will be a big challenge for journalists, if only because its name cannot be reduced to an acronym.

Maybe if you include an extra “a”, for “An Gaeltacht”, Catherine Martin could be considered the Minister for “CatMags”. But while cat magazines undoubtedly do fall under her media portfolio, that seems a bit narrow as a summary. If only “Animals” – as in their welfare, another traditional Green Party cause – had been included in her responsibilities, then it might have worked.

In the meantime, cultural commentators will pine for the time when Ireland had a stand-alone Minister for Fine Arts. It didn’t last long, alas – about three months. And even then, there was political manoeuvring involved.

The job was created for George Plunkett, father of the 1916 martyr, who had previously been nominal foreign minister (while Arthur Griffith did the actual job) in the unofficial government that functioned during the War of Independence. In appointing him, Éamon de Valera conferred more honour than power– the position did not involve a seat in Cabinet.

But the ministry organised at least one remarkable event during its tenure, a celebration at Dublin’s Mansion House, marking the 600th anniversary of the death of Dante, the great Italian poet.

Chaired by de Valera himself, wearing his ceremonial robes as National University chancellor, this was attended by a packed audience of the emerging Free State’s great and good. Speakers delivered papers in Irish, English, and Italian. There was suitable music too. Everyone agreed the event had been a huge success.

Micheál Martin’s intention to reinstate the outgoing portrait of Collins, alongside one of de Valera, in the Taoiseach’s office, looks a like a formal conclusion to the Civil War

Unfortunately, it was somewhat overshadowed in the next day’s newspapers.  Although Dante’s actual anniversary was earlier that autumn, Plunkett’s showcase was held on December 6th. That turned out to be a busy news day in Ireland, with Michael Collins and others having signed the Anglo-Irish treaty in London during the early hours.

The Fine Arts portfolio became an early victim of the Civil War that followed, the slide towards which began two days later when the cabinet split on the treaty, with de Valera against. Plunkett’s ministry did not survive until 1922, never mind 1924, when it would have been able to celebrate Ireland winning Olympic medals for painting and poetry in Paris.

Speaking of which, Paris may be where the idea emanated. For a time in the 1880s, France had a dedicated ministry for fine arts. Impressively, one of the ministers was a Proust (Antonin, no relation to Marcel). But even there, it was soon submerged in bigger departments.

The private secretary to Plunkett in 1921 was one Laurence Walsh. Poignantly, writing in this newspaper 40 years later, he explained the ministry’s raison d’être. It had been trying “to look beyond present strife”, he recalled, “to the eternal verities that outlive war and terror”.

Micheál Martin’s intention to reinstate the outgoing portrait of Collins, alongside one of de Valera, in the Taoiseach’s office, looks a like a formal conclusion to the Civil War, although perhaps we should wait for full details of the hangings (an ominous word) before anyone can relax.

The politics of paintings in Leinster House is always fraught. Already, there is a peace process in portraiture just inside the building’s entrance, where Collins and Cathal Brugha face each other across the lobby, both in military uniform as befits men who died violently, on opposing sides, in the summer of 1922.

But those and other pictures were hung after a renovation during the 1960s, on foot of which there were acrimonious Dáil exchanges about who had been placed where beforehand, and who was being promoted now.

At one point of the debate, Fine Gael’s Richie Ryan accused Fianna Fail’s Donagh O’Malley of a “gross libel” against him. O’Malley had suggested that Ryan’s apparent unfamiliarity with the previous layout arose from the infrequency of his attendance in the house.

The rotation of taoisigh will coincide with the centenary of some especially bitter events, including the mass execution of Free State prisoners

Even allowing for the ominous precedent from 1921, Dante’s 700th anniversary is unlikely to be one of the more controversial dates of the new Government’s time in office. Catherine Martin, whose vast portfolio also includes historical commemorations, may have bigger things to worry about.

Not the least of these, if the Government survives long enough, is that the rotation of taoisigh will coincide with the centenary of some especially bitter events, including the mass execution of Free State prisoners in November and December 1922. That hastened the end of the military conflict then.

But there may be a few hardline Fianna Fáilers, now on uneasy ceasefire, who will be sorely tested by the prospect of the pro-Treaty side seeming to win the Civil War twice.