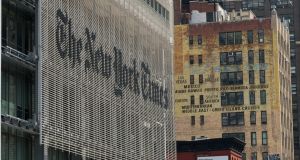 The word “gobshite” made its long-awaited debut in the New York Times this week. Photograph: Getty Images

This week’s exciting news from the US – that the word “gobshite” had made its debut appearance in the New York Times – sent me delving into this newspaper’s archives to find out when it first appeared here.

Perhaps surprisingly, it was as late as 1973, in an interview with an American dramatist then directing a stage version of Hugh Leonard’s Da for the Dublin Theatre Festival. The play had already been performed in the US, but the director admitted that rehearsing it Ireland had deepened his understanding of the text: “We were getting away with things in [Washington] without knowing what they meant – phrases like ‘Your man’ and ‘Gobshite’.”

Hugh Leonard seems to have played a leading role in the word’s popularisation, in fact. He is also cited under its listing in Terry Dolan’s Hiberno-English Dictionary, which quotes his memoir Out After Dark, viz: “‘How,’ Arthur Nolan said, ‘can a man be so bloody insensitive?’ ‘Old gobshite,’ someone else said.”

It took Roddy Doyle, however, to smuggle it into the NYT, via an excerpt from his new novel. The event was drawn to the world’s attention by an automated Twitter account, which is somehow triggered when the paper uses a new expression. Other words to make their New York premiere this week included “wokism”, “wrongthinkers”, and “paramiltarised”.

Speaking of which, according to the Oireachtas database, the g-word’s first appearance in a Dáil debate was provoked by the breakdown of the IRA ceasefire in 1997.

That seems suspiciously recent, although less surprising was the source, the late Fine Gael TD Brendan McGahon, who in a typically robust offering, reminded the house that he had never accepted the paramilitaries’ sincerity: “What we were offered was a mirage, a phoney peace, which attracted many gobshites who believed the IRA, the worst killing machine in Europe since Adolf Hitler. ”

If “gobshite” is a relatively modern addition to semi-polite conversation in Ireland, that may be because its job was previously performed by “gobdaw”, which means something similar. Strange to say, gobdaw doesn’t feature in Dolan’s dictionary, but it was a favourite of Myles na gCopaleen, who was a connoisseur of Hiberno-English terms of abuse, and was the first to introduce it to this newspaper, in 1941.

Promoting his new personalised book club, whose services would include publishing work written by members, copies of which would then be circulated to selected influential critics, with bribes, he wrote: “We sent one man ten bob with a new book and asked him to say that once one takes the book up, one cannot put it down. The self-opinionated gobdaw returned the parcel with an impudent note saying that his price was twelve and sixpence.” The word also featured in one of Myles’s less temperate responses to the Plain People of Ireland – a kind of Greek chorus with which he maintained a running dialogue – when, annoyed by one of their interjections, he called them an “ignorant, self-opinionated, sod-minded, suet-brained, ham-faced, mealy-mouthed streptococcus-ridden gang of natural gobdaws.”

The first syllables of both gobshite and gobdaw mean of course “mouth” (derived from Old French, surprisingly).

But that’s not the case with gobán, yet another Hiberno-English term of insult, even though it too has a similar meaning.

According to Dolan, it describes someone who “pretends to have a deep knowledge of things and has a lot to say”. As such, it is an ironic usage, echoing the Gobán Saor, a master craftsman from ancient Ireland who was also famously wise and so did always know what he was talking about.

Legend credits the Gobán Saor as builder of many of the round towers that still dot Ireland, including Glendalough, and also of many churches and oratories. Catholic literature considers him at least partly historical, merging him with a St Gobban, who was born near Donabate in north Dublin, circa 560AD and died at Derrynaflan, Co Tipperary, where one of the National Museum’s priceless chalices was found in 1980.

“Gobán”, “guban”, and “gub” are all sarcastic derivatives of Gobán Saor, suggests Dolan, where the first word is related to the Irish for “smith”.

But given their association with people who talk big, there must be some traces of “gob” involved too. And I see that there is also a second “gobán”, anglicised as “gobawn”, in his dictionary, meaning an improvised muzzle of the kind traditionally used to stop a new-born calf from “eating the hay or straw in its bedding”.

You don’t hear that word much now either.

But in these days when the Plain People of Ireland, streptococcal and otherwise, are being encouraged to wear improvised muzzles in public, perhaps the word gobawn is due a comeback.