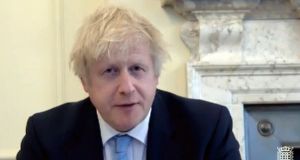 On October 2nd last year, the UK government published proposals for an amended protocol on Ireland/Northern Ireland, hoping to end a problem which had bedevilled negotiations for two years. It contained a couple of lines which were bound to cause enormous problems for unionism: “The zone of regulatory compliance will mean that Northern Ireland will be, in significant sectors of its economy, governed by laws in which it has no say. That is clearly a significant democratic problem.”

The other problem for unionism was that Boris Johnson’s arrival in 10 Downing Street in July had seen the Democratic Unionist Party abandoned by the European Reform Group within the Conservative Party’s parliamentary party and, consequently, no longer capable of preventing anything in a withdrawal agreement with the European Union which might become an existential threat to Northern Ireland’s constitutional position.

When Johnson’s Bill, including the new protocol, was carried by a majority a few weeks later, it was described by leading unionists in Northern Ireland as the “Betrayal Act”. Former DUP leader Peter Robinson told me: “Unless significantly amended the present deal would tilt the political axis from primarily east-west to North-South.”

Even moderate unionists... believed a potential border in the Irish Sea would represent the greatest threat to their identity and citizenship

Lord Empey, the Ulster Unionist Party’s chief negotiator during the Belfast Agreement, had similar concerns: “This is materially different than anything that has gone before. If it cannot be reversed during the negotiations during the transition period then Northern Ireland’s centre of gravity could gradually move in a Dublin/Brussels direction. This cannot be without constitutional consequences.”

It was a difficult time for the DUP (made more so when Johnson won a majority in December’s election). Its relationship with the Conservatives was in tatters, as were most of the pledges from Johnson about never committing to anything which would weaken the union. Its relationship with the Irish Government was also poor and the prolonged absence of the Assembly (which hadn’t met since January 2017) meant it didn’t have a power base to replace the loss of its king-making role in Westminster.

There was also an enormous sense of unease across unionism in Northern Ireland, something I hadn’t seen since the publication of the Anglo-Irish Agreement in 1985. Even moderate unionists, including many who had voted Remain in the 2016 referendum, believed a potential border in the Irish Sea would represent the greatest threat to their identity and citizenship – “The biggest blow to the union since partition,” as one leading academic described it to me.

Meanwhile, a faction of younger loyalists was organising anti-Betrayal Act rallies across Northern Ireland, promising to resist “any imposition of this deal”. A key figure within the older generation of loyalism – he had been involved since the 1970s – told me last December: “We’re looking at a totally different situation now than we have been before. It is about the union and a change to the union that makes this different – puts us into an economic united Ireland. And people on the streets are anything but happy and I’m trying to calm them down. There are cool, calm heads. But there are also people who want a different path.”

Six months ago unionism was in a very bad place. It looked like Johnson was throwing it to the wolves as the price for securing Brexit, yet even those who talked loudest of resisting him admitted privately that there was little they could do. The irony, of course, was that parliamentary sovereignty, which the DUP championed during and after the Brexit referendum, was the very thing which underpinned the legislation which would see Northern Ireland placed at a ‘constitutional disadvantage’ from January 2021 (the year which marks its centenary).

The biggest problem for unionism, though, is that the ‘betrayal’ comes from its own parliament and prime minister

But two events have calmed the situation. The first was the rebooting of the Assembly in January and the return of a unionist First Minister. The second was Covid-19, because there is nothing quite like a pandemic and the gigantic shadow of the grim reaper to refocus minds. Even the most committed unionists have bigger things to worry about right now, such as jobs, closed schools, possible redundancies, a new way of working and living and the likelihood of a second or third wave during the long, cold, dark days of late autumn and winter.

When it was confirmed on May 23rd that there would, despite Johnson’s insistence in November, be an Irish Sea border, the unionist response was generally very muted. Indeed, Edwin Poots, a DUP Executive minister and usually reliable bellwether, said in a radio interview on May 28th: “We’d have the advantage of actually having access to the single market and to the UK market and make NI an attractive place for inward investment.” The UUP, the smaller TUV and a few loyalist voices expressed concern about his response, but those concerns won’t translate into a serious campaign of opposition.

Present circumstances make meetings, rallies and protests impossible. There is anger, but no outlet for it. There is also a broader feeling across unionism that this is probably a time to consider everything within the ‘great scheme of things’ context and maybe begin to consider the protocol as not such a bad option. As a senior DUP figure put it to me: “The future of the union depends on a majority vote in Northern Ireland. If we can get what looks like the best-of-both-worlds solution on Brexit then we might reduce the vote for unity in a future Border poll.”

The biggest problem for unionism, though, is that the ‘betrayal’ comes from its own parliament and prime minister. That makes it much harder to fight, particularly when opinion polls in England suggest that few tears would be shed if Northern Ireland ceased to be part of the United Kingdom. There’s another problem for them. This sort of ‘betrayal’ does raise a fundamental question: why is your loyalty to a government and broader union which doesn’t seem to care all that much about your fate or constitutional status?

It would be inaccurate to say that unionists are happy with a new border. But nor are they so unhappy or, indeed, so confident about their chances of success, that they will choose to pick a fight with Johnson on this issue.