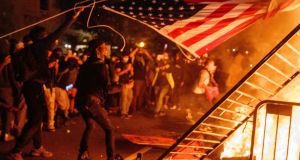 People throw a US flag on a fire during a demonstration over the death of George Floyd, who died in police custody, near the White House in Washington, DC, US. Photograph: Shawn Thew/EPA

It’s within my 5km radius. I want to walk down to Ballsbridge and burn a flag in front of the American embassy – my embassy – there. I want to call the cameras, but I don’t care if anyone sees.

I want to burn the symbol of oppression, but even more I want to burn the stars and stripes, symbol of a city on a hill, a beacon to the world. I want to burn hope and optimism and smug 20th-century valedictory pretences of post-war America that claimed sole victory over fascism, while denying black GIs access to the college funds white soldiers got – the ones that sent my white grandpa to college and graduate school.

I want to burn the flag that gave post-war home loans to my white grandparents while redlining black families out of the utopian new suburbs. Nevermind the Japanese Americans whose homes, businesses, and lives were stolen without restitution or apology.

American white supremacy is so much deeper and longer than that, but that is where my family, my complicity, and my benefit begin. Because my grandfather was a white soldier, he rose from immigrant poverty to a professorship, his children went to college, became professors, had children who teach Irish university students about insidious white supremacy at the core of American culture. His black fellow soldiers came home to legal segregation and were barred from equal education and housing. It’s the flag they fought under that I want to burn.

Minneapolis, Minnesota, has been on fire for four days. This is rebellion of the variety endorsed by the so-called Founding Fathers beloved by the right wing. Nationally adored, slave-owning Thomas Jefferson wrote in the 1776 Declaration of Independence of the rights of oppressed citizens, “when a long train of abuses and usurpations, pursuing invariably the same object evinces a design to reduce them under absolute despotism, it is their right, it is their duty, to throw off such government”.

The governor of Minnesota is calling for a restoration of order before addressing systemic injustice, while the president of the US – beacon to the world – threatens his own citizens with violence. Do not restore order. Burn it down.

Order, in contemporary America, means neoliberal capitalism that values goods and corporations above people, especially people of colour. It’s a system supported by militarised police often armed with defence department surplus; in Minneapolis this week, it was supported by the actual military in the form of the National Guard. These systems hold in place economic, criminal, and educational injustice aimed at all non-white people living in America.

My rage at the violent white supremacy – since it should not be called any other name but that arresting, accurate alarm bell – is boundless. But pointless.

If you’re white, whether American, Irish, British, or any other iteration of light-skinned European ancestry, what you can do to help is read. Start with Robin DiAngelo’s White Fragility. Move on to Brittney Cooper, Reni Eddo-Lodge, Angela Davis, James Baldwin, Audre Lorde. It almost doesn’t matter what you read if you commit to learn, and to listen to people of colour.

I want to burn the flag, but I will never burn my US passport. I want to burn my privilege, but I won’t absolve myself of responsibility and complicity so casually.

Power structures are exceedingly durable, they do suffer from being made visible, and they do sometimes fall. Fire is visible for miles and miles; so burn those structures down.