All quiet on the northeastern front: An Irishman’s Diary on Francis Ledwidge 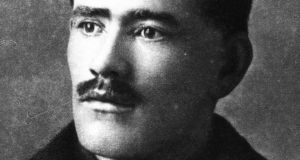 At least part of Francis Ledwidge’s decision to go to war may have been simple economics. Photograph: Hulton Archive/Getty Images

It may not be the deserted village, exactly, but Slane will certainly be depopulated this weekend, especially of poetry lovers and historians. At least 50 of these will be decamping to the Belgian city of Ypres, there to join the centenary commemorations of the death of the Slaneman who wrote this:

“Above me smokes the little town,/With its whitewashed walls and roofs of brown/And its octagon spire toned smoothly down/As the holy minds within.”

The octagon, as anyone who has passed through the Co Meath village will know, is the shape formed by the four big Georgian houses that face the crossroads at angles. As for the toned-down spire, that’s the stand-alone belfry of the local Catholic church: a relic of penal times, when spires could not be added to the main building.

The Francis Ledwidge Museum will be open as normal in his former cottage home throughout the weekend. But with the anniversary commemorations also toned down by the Ypres exodus, it’s to another Ledwidge Country that Irish literary tourists may have to look. Step forward the Dublin suburb of Inchicore.

These include a small but well-constructed exhibition of photographs and letters giving insights into a man who personified the Irish political divide before and after 1916.

At least part of Ledwidge’s decision to go to war may have been simple economics. One of the more interesting exhibits is a letter he wrote to the Weekly Irish Independent in 1914, looking for work.

Although a rising poet, he was willing to slum it. Foregrounding his literary abilities, the letter nevertheless makes clear his readiness to perform “even the most prosaic journalism in a crux”. Crux or no crux, he didn’t get the job.

In Dublin tourism terms, Inchicore has traditionally been a no man’s land: situated just beyond the western front, which in this context stretches from Kilmainham Gaol to the War Memorial Gardens at Islandbridge: both also involved in this weekend’s events.

The redevelopment of Richmond Barracks is an attempt to nudge that front slightly farther west, as is the recent reopening of its historic neighbour, Goldenbridge Cemetery: the first Catholic graveyard in Dublin after the Penal Laws, and modelled on Paris’s Père Lachaise.

Not being a war cemetery, that won’t be involved in the Ledwidge thing. But the centrepiece of commemorations is a concert at Richmond Barracks on Sunday night with, among other things, the vocal group Anúna adding music to Ledwidge’s beautiful poem, August:

“She’ll come at dusky first of day,/White over yellow harvest’s song./Upon her dewy rainbow way/She shall be beautiful and strong./The lidless eye of noon shall spray/Tan on her ankles in the hay,/Shall kiss her brown the whole day long.”

He occupied that role for only about 420 years until supplanted by St Leopold III in 1663. I didn’t get the memo, obviously.

Leopold was not a martyr, but his wife arguably was. Known as Agnes of Germany, she had 11 children by her first husband, another 11, or by some counts 18, with Leopold. They may have canonised the wrong spouse.

But getting back to Irish saints in Austria, it seems that one of the sights I missed in Salzburg was the statue of Virgil the Geometer, aka St Fergal, who was bishop of that city in the Eighth Century.

In Thomas Cahill’s 1995 bestseller, How the Irish Saved Civilisation, the same man is also described as a “satirist”. Which would have seemed apt last week, when the International Flann O’Brien Conference visited his adopted town.

But I can find no mention elsewhere of Virgil the Geometer’s satire, his nickname having been earned by a different, semi-scientific vocation.

I say semi-scientific because, on the plus side, he believed the earth was round, centuries before that became fashionable. On the minus, he thought it contained a separate underworld, with its own sun, moon, and people. Maybe it was Australia he was thinking of, but it was one of a number of unconventional beliefs that earned him papal censure.

1 Penneys will not reopen on Monday despite expected changes to lockdown rules
2 Donald Trump is in trouble, and that could spell very bad news
3 O’Doherty and Waters ordered to pay legal costs of case against State over Covid-19 laws
4 Some larger stores to reopen on Monday ahead of schedule
5 House parties are being held ‘with abandon’, Holohan warns
Real news has value SUBSCRIBE