As the Franco-German axis reasserts its self, Irish neutrality and corporation tax polices will have to be revisited 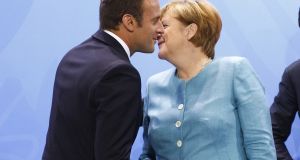 Mrs Merkel has put the financial transaction tax into her government programme and President Macron has raised French concerns over what the OECD calls profit shifting. Photograph: Michele Tantussi/Getty Images

Put simply, the European Union is a Franco-German project initiated by the Schuman Declaration of 1951. Together they are building a European home and while others may join in, they have to observe the house rules.

In these circumstances, the best strategy for Ireland is to be at the centre by adopting their agenda and adapting it to our own needs. And in view of Brexit, Ireland will need to be at the centre to get maximum advantage from our membership. It not an easy proposition .

Ireland volunteered to join the EEC in 1961 and gave certain commitments that now need to be revived. The then Taoiseach, Seán Lemass, fearing that Ireland would otherwise be isolated, virtually broke down the doors in Brussels to get into the community. Our application was opposed on many grounds, of which non-membership of Nato was the biggest. Lemass took this head-on and asserted that Ireland agreed with the objectives of Nato, was not neutral in the conflict between democracy and communism and implied that, if admitted as a member, would be prepared to join in the common defence of the EEC.

But defence remains a legacy issue because that commitment got lost after Lemass’s retirement, and is now forgotten. Discussion is off-limits and neutrality has become more a matter of theology than international politics. We have failed to update what it means in practice, as the Finns and Swedes have done.

But we won’t be able to do that for much longer because the Franco-German alliance has undergone a renaissance with the arrival of President Macron and with the imminent re-election of Mrs Merkel. European defence is back on the agenda, not least because of the US retreat from global affairs and the re-emergence of a truculent Russia.

The Franco-German conclusion is that we Europeans had better look after our own defence. As a result, this is one of those moments when Europe redefines itself and enlarges its core activities. We are unprepared for this development and failure to join in common defence, as Lemass had promised, may be our undoing.

The other legacy issue is corporate tax harmonisation. What originally started as a sensible policy for stimulating exports was then transformed into a sophisticated strategy for encouraging foreign direct investment. But it was never intended to become a mechanism for reducing the tax liabilities of international business and Ireland did not set out to become a tax haven, but that’s how we are now perceived.

The challenge here is that the taxation agenda is also quickening. Mrs Merkel has put the financial transaction tax into her government programme and President Macron has raised French concerns over what the OECD calls profit shifting. Then there are Commission proposals on a common consolidated tax base. Unless our stance on taxation is adapted to this complex agenda, then it too will be an obstacle to being part of the core.

That brings us to the strategic necessity for aligning our security and taxation policies with the new Franco-German agenda. It’s purely economic. The disruption from Brexit will be far greater here than in any other EU state. It constitutes an asymmetric shock that will necessitate a long period of adjustment similar to that which we experienced in the first decade of EEC membership.

We will inevitably be looking for assistance in building a new economic model while absorbing the shock of Brexit. To succeed at both we will need something analogous to the cohesion funds that eased our way into monetary union as well as special measures to offset the loss of competitiveness in the UK market, a consequence of the inexorable decline in the value of sterling.

This will be a tough case to make given the competing needs of the less well off member states. But it will have to be made and will be best done by invoking the principle of solidarity. Common sense dictates, however, that to win solidarity we must show solidarity and that means playing a full part at the centre of the Union. It’s a question of realpolitik, not sentiment.

These are not easy choices. They go against the grain of custom and practice. But they will have to be made.

Brendan Halligan is President of the Institute of International and European Affairs. He was general secretary of the Labour Party and a member of the Oireachtas and European Parliament.This article is based on an address to the MacGill summer school.

1 Fine Gael deletes spoof election video after negative response
2 Mary Lou has to call for the smelling salts as SF councillor deals a knock-out blow
3 Chris Hadfield on the climate crisis: ‘The world has seen much, much worse’
4 ‘He was some man’: Shane’s journey from care child to fearless activist
5 Paul Flynn: Three of my family’s favourite dinners
Real news has value SUBSCRIBE