So Long, Farewell – An Irishman’s Diary about Stefan Zweig, St Koloman, and the ups and downs of Austria 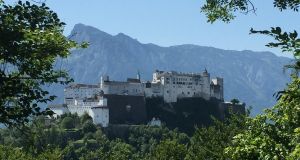 Whether they realised it or not, delegates to the Flann O’Brien conference in Salzburg this week were following in the footsteps of a 10th-century Irish holy man, St Colman. Fortunately, at time of writing, none of them have yet shared his fate.

Like Myles na gCopaleen, Colman was a martyr to the Irish language – except that in his case, the experience was more literal. Passing through Austria on a pilgrimage to the Holy Land in 1012, he attracted suspicion because of his strange appearance and speech. It was a time of war and, having no German, he could not make a convincing case for why his captors shouldn’t hang him as a spy.

Torture didn’t improve his vocabulary, it seems, so hang him they did.

But soon afterwards, locals reported miracles associated with his grave. The remains were exhumed and installed at the Abbey of Melk, where they still reside today. And in the centuries since, Koloman (as he was named locally) has acquired an impressive portfolio of reputed powers, being among other things the patron saint of “hanged men, horses, and horned cattle”.

He can also be invoked by those hoping to avoid the hangman, will assist women in the search for husbands – their own, that is – and may also ward off gout and the plague.

On top of all that, he is the patron of Melk and of Austria too.

His memorials include the town of Sankt Koloman, south of Salzburg. It’s more or less equidistant from the city with another municipality mentioned here earlier in the week: the village of Fucking. Happily for the requirements of good taste, they’re in opposite directions.

Of course, visitors to Salzburg also now follow in a more modern set of saintly footsteps: those of Julie Andrews, playing the semi-lapsed nun in The Sound of Music, which was shot in and around the city.

Alas, there wasn’t time this week to take her mother superior’s advice and climb every mountain in the area. I myself could manage only two, and those were more like hills really. There was little chance of finding my dream on either.

But the views, at least, were spectacular.

Forgoing the funicular, I first braved the precipitous, calf-muscle-straining ascent to the Festung Hohensalzburg, a medieval citadel that overlooks the city from 600 metres.

Later, across the river, I climbed the Kapuzinerberg, named for the Capuchin Monastery on top. And while there, as I discovered, I was also following the steps of a once famous, now largely forgotten, Austrian writer, Stefan Zweig.

Zweig occupied almost the same lifespan as James Joyce – from the early 1880s to the second World War. And at the height of his success, he was a friend and champion of Joyce, who visited his hill-top home in Salzburg in 1928. He found the Irishman moody – “I never saw him laugh” – and on their first meeting made the mistake of thinking him English, a point on which Joyce put him straight. In fact, as Zweig learned, the Dubliner’s self-professed problems included an inability to express himself in the Anglo-Saxon tongue.

Despite his own difficulties in that area, that’s not something even St Koloman could have helped with, so Joyce had to invent his own language in the end.

As for Zweig, outside his native country (and France, where he remains popular), he had fallen into near-obscurity before the eccentric 2014 film The Grand Budapest Hotel brought renewed interest.

It was loosely based on his books, and the main character – the ultra-civilised, endlessly efficient, but cynical concierge, played by Ralph Fiennes – was partly modelled on him.

The keynote of Zweig’s books, apparently (I haven’t read any) was nostalgia for a lost and better world. But he divided opinion sharply. A German critic, Michael Hofmann, has dismissed him as “fake” and “the Pepsi of Austrian writing” – a verdict Pepsi will not have enjoyed either.

Zweig must be in a small minority of writers who have had even their suicide notes badly reviewed. Decades after Zweig followed through on his, the same Hofmann professed to have grown irritable halfway through reading it, because of a sense that, even there, “his heart isn’t in it”.

Living in Brazil by then (1942), but depressed by the still-rising tide of Nazism, Zweig expressed a wish “to conclude in good time and in erect bearing a life in which intellectual labour meant the purest joy and personal freedom the highest good”.

Then he and his wife overdosed on barbiturates, a day after he completed his memoir The World of Yesterday and sent it to the publishers.