Brian Boyd: Trump is Commander in Chief of the cuckoo’s nest 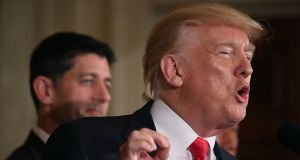 Once upon a time there was a big and important US Republican party politician who was seen as being dangerously right-wing, who made incendiary comments about minority groups and who was disavowed by all moderate members of his own party. A number of prominent psychiatrists lined up to explain why he “psychologically unfit to be president”. He was “emotionally unstable” and a “dangerous lunatic” they said.

These comments about Barry Goldwater’s mental state, which were carried in a 1964 article in Fact magazine damaged his US presidential campaign that year – Goldwater lost in a landslide to the incumbent Lyndon B Johnson.

Goldwater later sued Fact magazine for libel and won his case. Since then, a “Goldwater Rule” has been in place – it prohibits psychiatrists from giving opinions about the mental state of public figures they have not personally evaluated.

This week though the American Psychoanalytic Association told its 3,500 members that they should no longer be bound by the decades-old Goldwater rule. Past president of the association, Prudence Gourguechon, said that the rule change was necessary because Donald Trump’s behaviour “is so different from anything we’ve seen before”.

Unleashing a bunch of Freudians on Trump’s psyche may look good on a PR release but is about as useful as the pseudoscience of psychoanalysis is itself.

And they’re a bit late to the bun fight – plenty of psychiatrists have already gone rogue by openly flouting the Goldwater rule.

At a conference in Yale University in April, prominent psychiatrists stated publicly that Trump had a “dangerous mental illness”, was “paranoid and delusional” and that mental health experts had an “ethical responsibility” to warn the US people about the “dangers” Trump poses to the country.

Skipping over the fact that this solemn warning might have been a tad more useful if issued before last November’s election, the “ethical responsibility” these psychiatrists should be more concerned about is their complete lack of understanding of the issue here.

On Trump’s mental health charge sheet (shortened here because there’s only so much paper in the world) we find professional accusations of narcissism, impulsivity, poor attention span, paranoia, petty grudge-holding, the use of vulgar personal abuse against opponents, delusions of grandeur, a victim complex and compulsive tweeting.

But these traits also describe every single Dublin journalist I have ever known.

The professional phrase most routinely trotted out by mental health experts in the media about Trump is illuminating: that he suffers from a narcissistic personality disorder.

We know this add-water-and-mix diagnosis is nonsense because the eminent psychiatrist, Allen Frances, who wrote the criteria that define narcissistic personality disorder in the Diagnostic and Statistical Manual of Mental Disorders (basically, the Bible for psychiatrists) says it is nonsense.

Writing in the New York Times earlier this year, Frances said that Trump “doesn’t meet the criteria that define narcissistic personality disorder”. He added: “Trump may be a world-class narcissist, but this doesn’t make him mentally ill, because he does not suffer from the distress and impairment required to diagnose mental disorder.”

This is not splitting hairs; having accurate definitions of mental health/illness is important – and not just because celebrities have now made mental health awareness their cause du jour.

As Frances explains: “Trump causes severe distress rather than experiencing it and has been richly rewarded, rather than punished, for his grandiosity, self-absorption and lack of empathy. It is a stigmatising insult to the mentally ill (who are mostly well behaved and well meaning) to be lumped in with Mr Trump (who is neither)”.

Psychiatric name-calling is never a good look on anybody.

If we are to evoke mental health diagnoses with our politicians, we could more accurately start with president George W Bush. According to the BBC, Bush told Palestinian officials in 2003 that he heard voices in his head telling him to wage an illegal war in Iraq. The BBC reports that Bush told the officials “God would tell me ‘George, go and end the tyranny in Iraq’. And I did”.

In 2006, Tony Blair said on British TV that he too heard voices in his head telling to go to war in Iraq. He admitted that he had sought holy intervention in making the decision to invade, saying: “If you believe in God, the judgment is made by God.”

Mike Pence is one faulty heartbeat away from being the US president. Pence found God at a Christian music festival in 1978 – saying “on that day I gave my life over to Jesus Christ”. He has also said that any political decision he takes is subordinate to his belief in the supernatural: “I am a Christian, a Conservative and a Republican. In that order.”

Trump serves Mammon, not God. As Frances writes: “His psychological motivations are too obvious to be interesting. Analysing them will not halt his headlong power grab. The antidote to Trump is political, not psychological.”

1 Covid-19: Travel restrictions to stay and 'green list' put on hold amid fears of second wave
2 If you are young and live outside Dublin you could be in trouble
3 Ruth Negga: ‘People who say they don’t consider skin colour... are you f**king blind?’
4 ‘Only a civil servant’ could have come up with ‘unenforceable’ pub regulations
5 Fintan O’Toole: On this Fourth of July, the American republic is in grave danger
Real news has value SUBSCRIBE