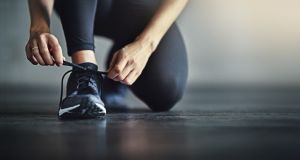 I took the Luas out to Tallaght on Wednesday night, planning to run a mile race at the local athletic track. It was the last of this summer’s Dublin “graded” meetings: wherein participants compete against others of their standard, from to fastest (Grade A) to the slowest (D), which gives even recidivist middle-aged runners like me some hope of not being embarrassed.

But in the event, delayed, I had to run a mile from the Luas stop to the venue, just to get there on time, which I didn’t.

The Grade D mile was over.  There was nothing left except 3,000s.

And there wouldn’t be enough entries there for four grades, or even three. There would be only an A race and a combined B/C one, into which I too could be thrown, if willing, like a sprat among mackerel.

This provoked a powerful feeling of déjà vu. It was almost as if I had taken the Luas back to August 1988, except there was no Luas in those days and probably no running track in Tallaght either. Instead, the meeting then was in Santry, but there too I had missed the shorter events, and had to make my debut at 3,000 instead.

The other difference, crucially, was they had the full range of grades. So, as a neophyte at the distance, I was allowed enter the D race.

Which – gasp! – I won, foreshadowing a glorious athletic career, except that I was off to Australia on a work visa the month after.

Among my first, it also turned out to be my last track race of the 20th century. One thing led to another until, suddenly it was 25 years later. I had three children, a career in journalism, and the beginnings of a belly.

That’s when I went back to running.

There would have been little chance of me winning this week’s 3k, even in Grade D.  But a glance at the mostly whippet-like and appallingly young men who turned up for the B/C race was enough to suggest that, for me, the challenge would be finding out if there was anyone I could avoid being lapped by.

No, was the answer. On the plus side, I went through the embarrassment barrier early and almost enjoyed having the track all to myself for the last 500 metres.

But the story of the night had happened beforehand, in the women’s mile. There was only one race there – a catch-all A/B/C event. And to prove that age is no excuse, it was won by one Anne Gilshinan, who recently turned 55. I mention that statistic because, not only did she beat everyone else in the field, regardless of age, the winning time of 5:08.42 set a new world record for her category.

That extraordinary result may be another symptom of a phenomenon much discussed in athletics these days: how, in general, 21st-century runners are slower than they were 20, 30, or even 40 years ago. One recent US study, for example, found that the average 5k time there was eight minutes slower in 2016 compared with 1996.  In marathons, the difference was 39 minutes.

Yes there are far more people running now, so that one obvious explanation was the rise of the “recreational” athlete, the kind liable to stop mid-race to take selfies.

But the trend was the same even at the elite end of the spectrum. And you can see it in the Dublin City Marathon, where times that made you an also-ran in the early 1980s could win it today.

Changes in lifestyle, especially diet, are the other explanation. A striking thing about old photographs from the 1970s and 1980s is – when you subtract the big hairstyles – how emaciated people look.

Maybe a generation of being fed properly, or conversely of too much fast food, has made running harder.

Or maybe, outside the very best, most runners are just more relaxed about it now and less inclined to unnecessary suffering.

Hence the ability of really good older athletes – the few not side-lined with chronic injury – to remain competitive.

Not that I can talk – much.  But reliving my glory days on the way home the other night, I couldn’t resist comparing my 1988 Grade D time with this week’s B/C race. And – ahem – it would have won.

In fact, whereas I couldn’t enjoy the run-in that night in Santry, because I was about a strained nipple ahead of the guy in second, I would this time have been able to savour the moment, blow kisses to the crowd, and maybe even pause for a selfie.