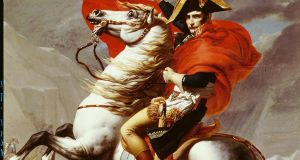 I can’t remember if it was for the old Inter Cert or Leaving Cert that we studied Maupassant’s short story Un Bandit Corse. It hardly matters which now.  But I can still recall the grim plot, which could have doubled as a flashback scene from The Godfather Part II.

Before it was French, Corsica had been Italian, or at least was ruled by the Kingdom of Genoa. Geographically and culturally, however, it had more in common with southern Italy, especially Sicily, with which it shared a culture of clannishness and the notorious vendetta system.

Hence the Maupassant story, in which an unnamed narrator visits the mountainous interior and hears the tale of a once-famous outlaw. The man starts out life as a timid child, we learn, who when his father is murdered, does not at first pursue vengeance, to the shame of his sister.

Instead he grows up, like a young Michael Corleone, apparently above such things.  Then one day, the killer marries and the wedding procession passes the still unavenged house, where the sight of it stirs something in the young man’s soul.

He now takes to the hills, gun in hand. And – plot spoiler alert – the other thing that starts climbing from this point of the story is the body count, as first his enemies, then the friends and relatives of his enemies, are eliminated.

French literature apart, I don’t recall us covering much Corsican history at school.  From somewhere in the mists of antiquity, however, I do remember mention of the short-lived republic declared on the island in the 1750s and the French invasion by which it ended.

But that probably only stuck in the mind because of another less-than-cheerful story from a great French writer, Voltaire, whose verdict on the Corsicans was more flattering than Maupassant’s, but even grimmer. Their principle weapon against the French, he wrote, had been “their courage”. This was so great that after one battle, “they made a rampart of their dead in order to have the time to reload behind them before making a necessary retreat; their wounded were mixed among the dead to strengthen the rampart. Bravery is found everywhere, but such actions aren’t seen except among free people.”

I’m reminded of both those tales by the impending anniversary of the Corsican we learned most about at school, Napoleon Bonaparte, who was born 250 years ago this month, on August 15th, 1769.

As everybody knows, he rose from modest origins to dominate not only France, but also much of Europe for a time. And when he reached the top, he showed no great interest in the island of his birth, taking pride in his Italian ancestry instead.

Even so, he must have inhaled something of the air that produced the Bandit Corse. Whatever it was – with considerable help from the French revolution and its unravelling – it impelled his vertiginous rise.

The historian Norman Davies suggests as much in his epic Europe – A History: “When he was sent to France for military education as a boy cadet,” Davies writes, “he had no personal wealth, no social connections, no competent command of the French language. He grew into a small, surly assertive young man, with more than a hint of the native vendetta not far beneath his sallow skin.”

By the end of the ascent, many vendettas later, he had also introduced Europe to another element of the ancestral heritage, or as Davies puts it, “the rules of Corsican kinship”. To guarantee loyalty, he appointed all his siblings to be kings, queens, and duchesses of conquered lands. Unlike the Corleones, he didn’t mind discussing business in front of the family.

The good and bad points of Napoleon’s legacy will be debated again this month. But rightly or wrongly, posterity has romanticised him in a way it hasn’t done for most war-mongers, or indeed for his nemesis and fellow islander, the Duke of Wellington, whose own 250th anniversary passed earlier this year.

Even Napoleon’s defeats – in fact, those especially – have been immortalised in song and story. The relevance of early 19th-century history was reinforced during my early school years when Abba won the Eurovision with a catchy update from the battlefield, Waterloo.

Like Voltaire, songwriters were also continuing to celebrate the courage of Corsican rearguard actions, with blithe disregard for the appalling casualty list.

I’m fairly sure that, in the dying years of the showband era, as late as 1985, I was occasionally forced to dance to a country-and-western ballad, in waltz-time, called “Bonaparte’s Retreat”.