US president Donald Trump has been impeached for a historic second time by the US House of Representatives. Video: Reuters 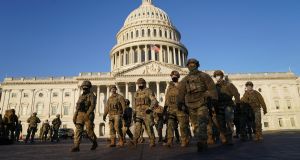 Heightened security measures, including the possible closure of the National Mall in Washington DC, are being considered for next week’s US presidential inauguration, as security concerns mount about possible attacks in the capital.

Large swathes of the city and several subway stations will be closed following last week’s storming of the US Capitol by supporters of Donald Trump.

President-elect Joe Biden on Thursday announced further details of next week’s event, including selecting Grammy-award-winning performer Lady Gaga to sing the national anthem during the inauguration ceremony. But spectators are being encouraged to stay away from the event, which typically attracts hundreds of thousands of people.

Further details of the scaled-back inauguration emerged as more arrests were made in connection with the January 6th riots. A man who was pictured carrying a confederate flag through the Capitol turned himself in to police on Thursday in Wilmington, Delaware. A recently retired Pennsylvania police officer who has been accused of hurling a fire extinguisher at a police officer, resulting in his death, was also arrested.

The FBI and law enforcement agencies have warned state officials of possible protests in all 50 states following last week’s attack on the US Capitol. Thousands of armed National Guard personnel have been deployed to Washington DC, with up to 20,000 eventually expected to help guard the city.

Negotiations continued behind the scenes regarding Mr Trump’s looming Senate trial, after he became on Wednesday the first president in history to be impeached for a second time.

Mr Trump was impeached by the House of Representatives for his role in inciting the violence that unfolded in the Capitol last week, after he encouraged his supporters to march to Capitol Hill during an incendiary speech delivered to thousands near the White House.

Ten Republicans joined Democrats in voting to impeach the president, including the third most senior House Republican, Liz Cheney. Members of the House Freedom Caucus – an ultra-conservative group of Republicans on Capitol Hill – have circulated a petition calling for the Wyoming congresswoman to resign as Republican House Conference chairwoman, but she has refused.

Mr Biden was due to deliver remarks on Thursday night outlining details of a new coronavirus rescue package to be unveiled when he takes office, which aims to prioritise access to vaccinations.

The speech was scheduled as Mr Biden issued a cautious statement responding to Mr Trump’s impeachment. The president-elect said last week’s criminal attack on the Capitol was “planned and co-ordinated”, and “carried out by political extremists and domestic terrorists, who were incited to this violence by President Trump”.

But he also highlighted the other issues facing the country, and the need for the Senate to respond to the coronavirus pandemic and the economy. “I hope that the Senate leadership will find a way to deal with their constitutional responsibilities on impeachment while also working on the other urgent business of this nation,” he said.

The statement captures Mr Biden’s challenge as he prepared to assume office in the midst of a looming impeachment trial, while seeking to implement his legislative agenda.

Mr Trump’s Senate trial will take place after Mr Biden is sworn in as president next week, but it is unclear what form it will take. For Mr Trump to be convicted, 17 Republicans would need to join Democrats in voting for such an outcome.

Republican senator Tom Cotton, who broke with Mr Trump by refusing to challenge the election result last week, said he would not support conviction, claiming the Senate lacked constitutional authority to hold an impeachment trial once a president leaves office.

Senate majority leader Mitch Mr McConnell – who indicated that he supported the impeachment push against the president – has not revealed how he plans to vote, stating that he first needs to see all the evidence.

The White House is said to be lobbying various Senate Republicans to support the outgoing president in the trial. If the Senate secures the two-thirds majority needed to convict, it can then hold a second vote barring the impeached president from holding office again.