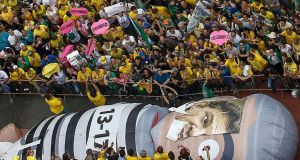 Brazil’s already bitter presidential election is slipping into legal acrimony that threatens to undermine the legitimacy of the eventual winner.

The two men face each other in a run-off round on Sunday, October 28th, with opinion polls making Mr Bolsonaro clear favourite. Supporters of both campaigns have been spreading false or misleading information on social media and WhatsApp. But leading fact-checking organisations in the country say those linked to Mr Bolsonaro are the worst offenders.

Though the WhatsApp initiative organised by his wealthy supporters has not yet been directly linked to the Bolsonaro campaign it violates Brazilian electoral law, which since 2015 bans any sort of corporate donation. Following the Folha report WhatsApp said it had moved against the companies involved.

On Saturday Brazil’s federal police announced an investigation into alleged schemes on WhatsApp following a request from the country’s chief federal prosecutor. Brazil’s top electoral court will also investigate the case at the request of Mr Haddad. The court has the power to annul the mandate of any eventual winner, but precedent indicates this would only happen after several years if at all.

A judge on the court upheld claims that the re-election of Dilma Rousseff to the presidency in 2014 violated campaign financing laws. But a majority of his colleagues refused to strip her winning ticket of its mandate, citing fears over political stability. The final vote took place almost three years after the election, by which time Ms Rousseff had already been removed from office by congress.

Following the latest revelations the Democratic Labour party whose candidate Ciro Gomes was eliminated after coming third in a first round earlier this month demanded the result be annulled while a member of Mr Haddad’s Workers Party is seeking to have Mr Bolsonaro’s candidacy expunged.

Being a free network, WhatsApp has proved hugely popular in Brazil. But in recent election campaigns it has emerged as the favoured vehicle of those seeking to spread hateful and false information designed to influence voters after clampdowns against such practices on Facebook’s news feed and Google’s search results. As a closed network WhatsApp has proved particularly difficult to monitor in real time, allowing those who would spread content that violates Brazil’s electoral laws to do so with near impunity.

Last week a group of concerned Brazilian academics and journalists asked WhatsApp to make several modifications to the application in order to temporarily limit its reach in Brazil. In response the company said there would be insufficient time to implement changes before the vote.

In an article reinforcing their request published in the New York Times the group disagreed, noting WhatsApp made changes quickly in India after rumours disseminated on its app provoked lynchings.

1 Officials refuse to rule out ‘Midlands lockdown’ following Covid-19 surge
2 Masks Q&A: Who has to wear them in shops and what happens if you don’t?
3 How a ship abandoned by its owner brought deadly cargo to Beirut
4 Reopening of schools in many EU countries has not led to Covid-19 increase, ECDE report finds
5 Ireland's 'R number' of almost 2 a 'serious concern' as number of new cases jumps
Real news has value SUBSCRIBE