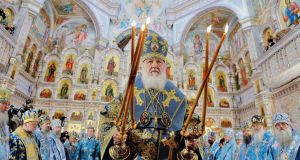 Five years ago, as Ukraine’s then president, Viktor Yanukovich, weighed up whether to loosen ties with Moscow and pursue integration with the European Union, his Russian counterpart Vladimir Putin paid him a visit.

As part of an itinerary rich with religious symbolism, they visited Crimea for the consecration of a new bell in St Vladimir’s cathedral, which stands where the eponymous prince was supposedly baptised in 988 and adopted Orthodox Christianity for the eastern Slavs.

Evoking the legacy of St Vladimir and his baptism 1,025 years earlier, Putin told his audience that Russians, Ukrainians and Belarusians shared a heritage and “common spiritual values that make us a single people”.

“It would be hard to deny this,” he insisted. “We can only agree with it.”

Plenty of Ukrainians would have disagreed then and many more would now, four years after Russia seized Crimea and launched an undeclared war in eastern Ukraine, in response to a revolution sparked by Yanukovich’s decision to stick with Moscow and scrap the EU deal.

During nearly two decades in charge, Putin has dramatically boosted the power and prestige of the Orthodox Church at home, while portraying Russia as a bastion of conservative Christianity and traditional values.

After annexing Crimea he used its religious significance to justify the move, claiming that the place of St Vladimir’s baptism had “invaluable civilisational and even sacral importance for Russia, like the Temple Mount in Jerusalem for the followers of Islam and Judaism.”

Having been depicted as a saint in Russian icons and heard his rule described as a “miracle’ by Moscow Patriarch Kirill, recent events must be galling for Putin.

On October 11th, the Ecumenical Patriarchate of Constantinople announced it was cancelling the Moscow Patriarchate’s 332-year spiritual jurisdiction over Ukraine and preparing to grant independence to the country’s church.

Fours days later the Russian church cut ties with Constantinople and said it had forfeited its traditional role as “first among equals” in the Orthodox Church.

For Ukraine’s leaders this was a historic triumph over its mighty neighbour.

With his ratings in the doldrums ahead of elections next year, Ukrainian president Petro Poroshenko is whipping up a religious fervour of his own, and declared Constantinople’s decree “a victory for good over evil, light over darkness”.

Two pro-Kiev Orthodox churches hope to unite in the coming weeks and receive a decree of independence from the Constantinople Patriarchate next month.

One reason for their haste may be the fear of violence, and how Russia could provoke or respond to it.

Russian politicians and senior Orthodox clerics say there will be bloodshed in Ukraine when, as they predict, supporters of an independent Ukrainian church try to seize monasteries controlled by the Moscow Patriarchate.

The Kremlin has vowed to “defend the interests” of the Russian church faithful, and parliament in Moscow called Ukraine “a terrorist state” that sought to “destroy the real Orthodox Church” as part of its “war against ethnic Russians and Russian speakers” in the east.

An escalation in fighting, the Russian deputies warned, “will receive an appropriate response and inevitably lead to catastrophic consequences” for Ukraine.

Ukrainian officials have told ultra-nationalist groups that violence at religious sites will not be tolerated, but the risk of some sort of attack on a monastery or church is considerable and dangerous.

While many Ukrainians celebrate the decree from the Constantinople Patriarchate in Istanbul, work remains to be done to secure church independence

Moscow could instigate or exploit such incidents to further destabilise Ukraine during the 2019 presidential and parliamentary elections, and rally pro-Russian voters against Poroshenko and his allies.

“We have to wait for [Ukraine’s] domestic political cycle to end, and I very much hope that we will be able to build some kind of relations with the new leadership of the country. We are ready for this, and we want this,” Putin said recently.

The Russian Orthodox Church seems to share his hopes for political change in Ukraine.

Its spokesman Metropolitan Hilarion said the Kiev churches and Constantinople were racing through the independence process “because they understand that if a different president comes along, they won’t have the same wonderful conditions that [Poroshenko] is creating for them.”

Ukraine and Russia are in the eye of this storm, but it is buffeting a wide region where Moscow and the West vie for influence.

The Serbian Orthodox Church backs its Russian counterpart in the row, which could shake Belgrade’s ecclesiastical power in the Balkans and strengthen demands for recognition from breakaway churches in Macedonia and Montenegro.

In Moldova the Russian church faces a challenge from a pro-Romanian rival, and Patriarch Kirill plans to visit the small ex-Soviet state this month.

While many Ukrainians celebrate the decree from the Constantinople Patriarchate in Istanbul, work remains to be done to secure church independence.

This week the head of the small Ukrainian Autocephalous Orthodox Church revealed that he had argued with the leader of the larger Kiev Patriarchate over the absence of a clear charter, name and status for their new unified church.

It is the kind of scenario Poroshenko warned against last weekend, when recalling the fractious reputation of Ukrainian Cossack commanders known as hetmans.

“I hope and believe that the [unification] council will run counter to our national saying, that where there are two Ukrainians there are three hetmans,” he told a crowd outside Kiev’s 11th-century Cathedral of St Sophia.

“The responsibility resting on those who take part ... will be, without any exaggeration, historic.”