October 20th, 2018: Thousands of protesters calling for a referendum on the final Brexit deal have marched in London. Organisers of the People's Vote campaign say the event is being attended by more than 500,000 demonstrators. Video: Reuters 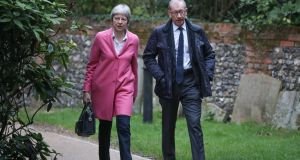 UK prime minister Theresa May and her husband Philip arrive for a church service near to her Maidenhead constituency on Sunday. Photograph: Andrew Matthews/PA Wire.

The UK would accept a possible extension to its post-Brexit transition period with the European Union if the bloc drops its demand for an Irish backstop, Britain’s junior Brexit minister Suella Braverman said on Sunday.

Talks between Britain and the EU have stalled over a disagreement over the backstop - an insurance policy to ensure there will be no return to a hard border on the island of Ireland if a future trading relationship is not in place in time.

“We would accept a potential extension by a few months subject to either a finite time limit or a mechanism to extricate ourselves from it if it meant breaking this impasse and avoiding the very unattractive proposal by the EU which is an indefinite customs union and a limbo period,” Ms Braverman told Sky News.

She insisted progress had been made in the exit talks.

“It’s not time for panicking, it’s time for staying calm and staying focused on the goal which we are all on track to secure,” she told Sky’s Sophy Ridge.

Ms Braverman said a no-deal outcome was something the country would be able to survive.

Brexit secretary Dominic Raab said any extension to the transition period had to have a “route out”.

He told BBC One’s Andrew Marr Show: “It could be time limited, there could be another mechanism.

“There needs to be something which allows us to control how long we are there for to avoid any sense that we are left indefinitely in a sort of customs union limbo. That wouldn’t be acceptable.”

Mr Raab called for goodwill and “a bit of oomph on both sides” to get the exit deal over the line.

He suggested the transition period could be extended by three months but the move would have to “solve” the Irish backstop issue.

“If there does need to be a bridge I am open minded about the possibility about using a short extension of the IP (implementation period). Let’s say three months,” he said.

Minister for European Affairs Helen McEntee said that Mr Raab was trying to introduce “new red lines” that “absolutely contradict commitments that have already been made.”

She noted that British prime minister Theresa May had made “a very clear commitment” last December that there had to be a so-called backstop - a guarantee of no hard Irish border after Brexit - within the divorce treaty and that in March she agreed the backstop would remain in place unless and until a future trading relationship between the EU and UK addresses all concerns around the Border.

“So to have essentially a new red line introduced saying that we won’t move forward if the backstop is there or if it doesn’t have a time limit to it, that is not really how negotiations work,” she told RTE’s This Week radio programme.

Responding to Mr Raab’s comments, a spokesman for Tánaiste and Minister for Foreign Affairs Simon Coveney said the EU and UK negotiators needed to “get back to work in Brussels” and complete the final 10 per cent of the withdrawal agreement.

“This will not be achieved in newspapers or over the airwaves. Ireland wants a close future trading deal with the UK but at this point the commitments already made need to be honoured,” he said.

Fianna Fáil leader Micheál Martin said Northern Ireland could have “the best of both worlds” out of an eventual Brexit deal.

“The deal which the EU is offering Northern Ireland is extremely generous,” Mr Martin said in his speech to the Fianna Fáil Wolfe Tone commemoration at Bodenstown, Co Kildare. “It offers permanent access to both the UK and the EU single markets, thereby protecting existing employment and providing a new basis for growth.”

Meanwhile, a leading Conservative Brexiteer is attempting to make illegal any backstop that would treat Northern Ireland differently from the rest of the United Kingdom.

Former Brexit minister Steve Baker has put down amendments to a bill that would give senior civil servants more powers to make decisions while the Northern Ireland Assembly and Executive remains suspended.

Mr Baker’s amendments would prevent officials from agreeing “that distinct arrangements are appropriate for Northern Ireland in connection with leaving the European Union” without the approval of the Assembly.

Officials would also be forbidden from implementing any new EU obligations that could arise during an implementation or transition period or under a Northern Ireland backstop.

If they are approved when the bill is debated next Wednesday, the amendments would kill off the backstop because even if the Assembly is restored, the DUP would block any action to implement distinct arrangements for Northern Ireland.

Last July, Theresa May’s government accepted an amendment to a customs bill that made it “unlawful for Her Majesty’s Government to enter into arrangements under which Northern Ireland forms part of a separate customs territory to Great Britain”.

The House of Commons approved the amendment without a division and Downing Street has cited it in recent days as a reason why Mrs May cannot accept a backstop that would leave Northern Ireland in a different customs territory to the rest of the EU.

If the Conservative government accepts Mr Baker’s amendments at this stage in the Brexit negotiations, the EU is likely to interpret it as a demonstration of bad faith. The British prime minister told EU leaders that she would work with them to find agreement on the backstop.

She said she stood by the commitments she made last December, March and June that there would be a legally operable backstop that would remain in place “unless and until” a permanent solution was found to keep the Border open after Brexit.

Hundreds of thousands of people opposed to Brexit marched in London on Saturday calling for a “people’s vote” on the deal agreed to take the UK out of the European Union.