British MPs back vow by May to seek border backstop changes 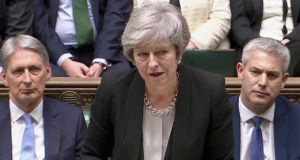 British prime minister Theresa May said she would seek legally binding changes to the Brexit withdrawal agreement that deal with concerns on the border backstop. Photograph: Reuters

The Conservative benches welcomed the defeat of Yvette Cooper’s amendment, which would have allowed MPs to postpone Brexit rather than leave without a deal, with a loud, satisfied growl. But when MPs voted to back Theresa May’s Brexit deal on condition that the backstop was replaced, the cheer that went up sounded more like relief than of triumph.

“A fortnight ago, this House clearly rejected the proposed withdrawal agreement and political declaration with just 202 members voting in favour. Tonight a majority of honourable members have said they would support a deal with changes to the backstop,” Mrs May said.

“We will now take this mandate forward and seek to obtain legally binding changes to the withdrawal agreement that deal with concerns on the backstop while guaranteeing no return to a hard border between Northern Ireland and Ireland. My colleagues and I will talk to the EU about how we address the House’s views.”

Twenty-four hours earlier, the prime minister appeared to be on the verge of another humiliation after Conservative Brexiteers in the European Research Group (ERG) said they could not back an amendment tabled by 1922 Committee chairman Graham Brady. They complained that the amendment’s call for the backstop to be replaced by “alternative measures” to ensure an open Border was too vague.

Overnight, a group of leading Conservative Brexiteers and Remainers produced their own proposal to replace the backstop with technological customs solutions and tariff-free trade. Under the proposal, dubbed the Malthouse compromise after junior minister Kit Malthouse who hosted the talks, Britain would pay the £39 billion divorce bill in full and extend the transition period to three years.

The European Union had rejected almost every element in the proposal but it was soon clear that it had the support of almost all Conservative MPs and the DUP. When the prime minister promised to seek changes to the text of the withdrawal agreement itself, something the EU has consistently ruled out, the DUP and the ERG agreed to back the Brady amendment.

“She can be assured of our support in trying to find a solution that avoids any hard border on the island of Ireland as well as any borders within the United Kingdom, ” Nigel Dodds said.

Mrs May said that when MPs rejected her Brexit deal by 230 votes two weeks ago, they had told the world what they did not want. Now they had a chance to say what they did want and to send her back to Brussels with a mandate to renegotiate the backstop.

Independent unionist Sylvia Hermon expressed frustration at the prime minister’s refusal to describe the “alternative measures” she envisaged to keep the Border open without the backstop.

“The backstop was there to protect that peace, and I am very sorry that the prime minister has moved away from that today,” she said.