Britain announces 13 new cases of coronavirus, putting its total at 36

WHO confirms 87,100 cases diagnosed globally with almost 78,000 of those in China 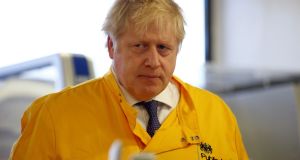 Britain announced a jump in coronavirus cases on Sunday, with 13 new infections taking the total to 36, and prime minister Boris Johnson said he expected the number to rise further. The cases included the first diagnosis in Scotland.

Mr Johnson will chair a meeting of the UK government’s emergency response committee on Monday, signalling a step-up in attempts to tackle the virus that began in China and has killed almost 3,000 people worldwide.

“We’ve found about 35 people in this country have, or have had, the illness and clearly there may be more. That is likely now to spread a bit more,” Mr Johnson said during a visit to a public health facility in London, before another case was reported in Scotland.

“I am very confident that this country has the capacity to deal with it.”

Globally, the World Health Organisation said at the weekend there were more than 87,100 cases diagnosed with almost 78,000 of those in China. Some 61 countries have now registered cases of Covid-19.

The United States announced at the weekend that it would start screening travellers for the condition and ramp up production of masks and test kits as the government attempts to reassure Americans.

On Sunday president Donald Trump’s administration officials tried to calm market panic that the coronavirus could cause a global recession, saying the public had over-reacted and that stocks would bounce back due to the underlying strength of the US economy.

The first American to die from coronavirus was a man in his 50s in Washington state. He had underlying conditions, officials said on Saturday. They still do not know how he contracted the disease.

Iran has had the highest number of deaths from the illness outside China and several countries in the region have reported infections among people who travelled to the Islamic Republic.

“There were 385 new cases of infected people in the last 24 hours, increasing the total number to 978. The death toll is 54,” spokesman Kianush Jahanpur said, calling on Iranians to avoid any unnecessary trips and stay at home. Some neighbouring countries have closed their borders, with several countries stopping flights.

The death toll from Covid-19 in Italy has risen to 34, five more than a day earlier, officials said on Sunday, as the government prepared to boost spending to help the fragile economy.

The head of Italy’s civil protection agency said the cumulative number of confirmed cases of the virus had jumped to 1,694 from 1,128 on Saturday, virtually all of them coming to light since February 20th in the worst such contagion in Europe. Of that number, 83 people had fully recovered, while 140 patients were in intensive care. The vast majority of those who have tested positive have few, if any, symptoms. About 90 per cent of all cases are concentrated in the wealthy northern regions of Lombardy, Veneto and Emilia Romagna.

In Tenerife, tourists staying at a hotel that has been on lockdown after five cases of Covid-19 were detected there were told they were free to leave if they test negative for the virus, regional health authorities said on Sunday. Hotel guests, now on their sixth day of confinement, can leave if they do not show symptoms, test negative for the virus less than 24 hours before their flight, and continue their period of isolation in their home country, the Canary Islands’ health authorities said.

The fifth case was detected at the hotel on Saturday. The woman, part of the same group as the four original cases at the H10 Costa Adeje Palace Hotel, had been in isolation in her hotel room.