Berlin wall anniversary: How I escaped from East Berlin in a Lotus sports car

30 years after the Berlin Wall was torn down the city is still in a state of flux and reunification process is still ongoing. Video: Enda O'Dowd 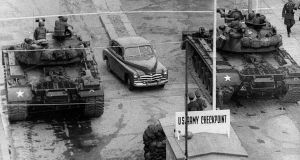 A car rides between US tanks, in October 1961, across the border at the Berlin Wall between East (Soviet sector). Photograph/AFP/Getty

Even 41 years later, Eva Röser isn’t quite sure how she found herself trying to escape from East Berlin, hidden in a Lotus Seven sports car.

On Saturday, Germany marks the joyous evening 30 years ago when the hated Berlin Wall fell, setting in train events that ended half a century of division in Germany and Europe.

It’s taken 30 years for Eva, a 69-year-old retired dental technician, to speak out about her remarkable adventure, which she still struggles to believe herself.

“I guess I was naive and stupid and didn’t think too much about it,” she told The Irish Times, in her first newspaper interview.

It was 1978, she was 27 years old and living in East Berlin. For two years she’d been in a long-distance relationship with a man from West Germany with a love of sports cars and a Lotus Seven to prove it.

When she found out she was pregnant, he visited her two days later. It was October 7th, 1978, the 29th anniversary of the foundation of East Germany.

Without warning, he asked her to leave with him. A dazed Eva heard herself agree.

They left her apartment at 11pm and drove to a deserted yard where Peter removed the rear petrol tank and eased her into the narrow cavity on the rear axle: 95cm by 45cm by 39cm. She was slim and 175cm tall (5ft 9) but it was still a squeeze.

All she remembers is adopting a contorted embryo position. He covered her up, connected the fuel line to a bottle filled with enough fuel to get them over the border, and drove to the Heinrich-Heine-Strasse crossing.

Eva can still remember the guards talking and the rolling wheels of the mirror they used to scan the underside of the car. “I remember it took a long time, perhaps 30 minutes in all, with passport and customs checks,” she says. “One cough or sneeze I knew would be enough . . .”

As she talks the adrenalin is back, her breath is coming fast.

Born in a Saxon village, Eva remembers an East German state that looked down on her father, a self-employed carpenter, and refused her permission to study. She became a dental technician master instead and moved to a modern high-rise near Alexanderplatz, with a view of West Berlin.

Only much later, when she applied for her Stasi file, did she realise the secret police began spying on her when she was 17: what she wore, where she went, who she met.

Flicking through the file today in a Berlin cafe, Eva thinks they were waiting to entrap her into becoming an informer herself. The Stasi never got the chance.

At a refugee facility she underwent several interrogations from disbelieving Allied officials who feared she was an East German agent. Eventually she was let go and phoned her mother in Saxony who, Eva recalls “began screaming”.

The Stasi interrogated her family and her work colleagues, but no one knew in advance of Eva’s spontaneous escape – not even Eva.

“Those assholes knew everything about me except the most important information: when I fled,” she laughs.

In West Berlin she married her boyfriend but the couple broke up shortly after she gave birth to their son, Stefan. He was 10 when he learned of his mother’s escape, pregnant with him. The Berlin Wall had just fallen.

Today Stefan Röser is amazed at his mother’s bravery, given the “catastrophic” risks had she been discovered: “Prison for her, forced adoption for me. But it ended well.”

As she built up her new life, Eva was pressured to go public with her escape story – it was a propaganda coup for West Berlin – but she refused to tell her story. Why?

“I didn’t want the lads who were on the border that day punished,” she said. “They were there to do a job but were perhaps more interested in the Lotus.”

Eva Röser is one of an estimated 100,000 people who fled successfully to West Germany, but she has no sentimental feelings about November 9th, 1989. For millions, the Berlin Wall’s end is a moment of joy. She’d rather not see her face in the paper, remembering the pain the wall caused. For Röser, the real magic came 11 years earlier.

“The streets of East Berlin were always dark, with few street lamps and no advertisements. When my boyfriend told me West Berlin was all lit up, I didn’t believe him. Then I saw it with my own eyes. That’s something I’ll never forget.”