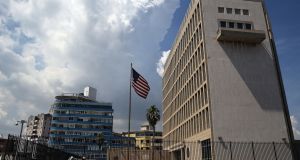 A classic car passes in front of the American embassy in Havana, Cuba. Photograph: Alejandro Ernesto/EPA

The United States has ordered more than half of its diplomatic personnel to leave Cuba, amid growing concern about a spate of illnesses and maladies that have struck down staff at the American embassy in Havana.

The mysterious illnesses – which range from hearing loss to nausea – have affected at least 21 US diplomats or their family members over recent months.

While Washington has yet to directly blame Cuba for the developments, the State Department announced it was moving 60 per cent of its diplomatic staff and their families back to the US, having expelled two Cuban diplomats from Washington earlier this year. The state department also warned American citizens not to visit Cuba, in the most significant escalation of tensions between the countries since the detente negotiated by Mr Trump’s predecessor, Barack Obama.

“Until the government of Cuba can ensure the safety of our diplomats in Cuba, our embassy will be reduced to emergency personnel in order to minimise the number of diplomats at risk of exposure to harm,” said Rex Tillerson, US secretary of state.

A senior state department official said that while the governments of the US and Cuba had not yet identified the responsible party, “the government of Cuba is responsible for taking all appropriate steps to prevent attacks on our diplomatic personnel in Cuba”.

Mr Tillerson met Cuba’s foreign minister, Bruno Rodríguez, in Washington earlier this week to discuss the issue – the highest-level meeting between the Cuban government and the Trump administration to date.

Following the meeting, Cuba said it had “never perpetrated nor will it ever perpetrate attacks of any kind against diplomats”. It continues to claim it has no involvement with the attacks.

The controversy threatens to undo the rapprochement between the two countries that took place under the Obama presidency.

Mr Trump has already moved to undermine the detente, threatening to reconsider sanctions if the Cuban government does not implement reforms. The American president also name-checked Cuba in his speech to the UN general assembly last week in New York, criticising the “corrupt and destabilising regime” in the country.

President Trump used a speech in Washington on Friday to underscore the need for tax reform, pledging to introduce “a giant, beautiful, massive” tax cut.

Addressing the National Association of Manufacturers, Mr Trump said that, for decades, Washington’s policy on manufacturing could be summarised in one word: surrender.

“Under my administration, the era of economic surrender is over, and the rebirth of American industry is beginning. America is winning again and America is being respected again,” he said.

Mr Trump was speaking two days after his administration announced a proposal to reform the tax code, which, if passed into law, would be one of the most dramatic changes in the tax system in decades. Among the proposals announced was a cut in the corporate tax rate to 20 per cent, and a revision of the personal tax system, including a reduction in the number of tax bands from seven to three.

Senate Republicans on Friday gave the senate finance committee and the house ways and means committee – the two principal tax-writing committees – until November 13th to come up with draft tax Bills.

The senate budget committee on Friday published a budget resolution setting out federal taxation and spending plans – a key stage in moving forward with tax reform.

With few legislative victories to show after eight months in power, the Republican Party is keen to secure agreement on tax reform by the end of the year, although already tensions have opened up between certain factions of the party, particularly regarding changes proposed to the individual tax system.

Analysis by the Tax Policy Center, a nonpartisan institute, found that the Republican tax plan would yield major benefits for the top 1 per cent of Americans, but more modest tax cuts for the middle classes.

Mr Trump said that the new tax proposal was a “once-in-a-generation opportunity to pass tax reform that is pro-growth, pro-jobs, pro-worker, pro-family, and pro-American.”

“Our current tax code punishes companies for doing business in the United States, and encourages them to leave … We need a tax system that encourages companies to stay in America, grow in America and hire in America.”