Government moves to secure US deal for Irish immigrants 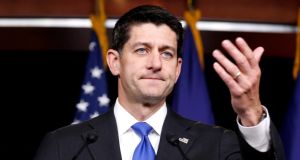 A fresh move is under way by the Government to secure a deal for Irish immigrants to the United States amid expectations that the US Congress will present new immigration legislation by next March.

Following US president Donald Trump’s announcement last month that he was dismantling the deferred action for childhood arrivals (DACA) programme – the “dreamers” law protecting undocumented migrants who arrived in the US as children – he gave Congress six months to find a legislative solution.

This is now being seen as an opportunity for Ireland to secure the inclusion of its own immigration reform proposal in the forthcoming legislation.

There has been a concerted effort by Irish officials in recent weeks to press the case among Republicans in Washington.

The issue is likely to feature strongly during his week’s visit to Washington DC by Minister for Foreign Affairs Simon Coveney and US special envoy John Deasy. Mr Deasy, who was appointed by Taoiseach Leo Varadkar earlier this year to liaise with Congress on the issue, has held dozens of meetings with members of both sides of the House and Senate in recent months and with members of the administration.

“It’s clear now that immigration legislation dealing with DACA, border security and other issues has a reasonable chance of passage in the new year,” Mr Deasy said. “This is now a real focus for us which will continue this week.”

Mr Coveney and Mr Deasy are expected to meet senior figures on Capitol Hill, including House speaker Paul Ryan and minority leader Nancy Pelosi, as well as the director of the office of management and budget, Mick Mulvaney.

The new push comes as research by the Pew Institute concluded that the number of undocumented Irish living in the US is likely to be closer to 10,000 than the 50,000 figure usually cited. This has led to expectations that the lower number could make it politically more palatable for an agreement to be reached.

While the focus is on the undocumented Irish, some officials believe it may be more likely that some form of deal could be achieved for future flows of Irish people coming to the US.

Ireland has long argued that its citizens are unfairly treated under US immigration laws, and that the number of visas allocated to Irish citizens does not reflect the strong historic links between Ireland and the US. More than 35 million Americans claim Irish heritage. In particular, successive governments have argued that Ireland was adversely affected by the 1965 US law which opened up immigration to more countries but disadvantaged small countries such as Ireland.

In particular, the Australian model has been identified as a possible example for Ireland. Australia, a long-time military ally of the US, was given a special E3 visa programme when the US-Australia trade deal was negotiated. Offered only to Australian citizens and their spouses, it allows more than 10,000 Australians with third-level education to live and work in the US every year.

While the possibility that Congress may introduce new immigration legislation by March – which may also include wording on Mr Trump’s Mexican border wall and a provision for seasonal farm-workers – has raised hopes of an opportunity for Ireland, it is by no means certain that the new legislation will be passed.

Immigration reform is a notoriously difficult subject, and the last time a major piece of US immigration reform was passed was in 1986. An immigration Bill offering special treatment for several countries, including Ireland, was advanced in 2013 but ultimately collapsed.

A spokeswoman for the Department of Foreign Affairs said: “We continue to engage with the US Congress and administration to explored all possible options for the undocumented,” noting that Mr Coveney and Mr Deasy would raise the issue with various interlocutors this week in Washington.