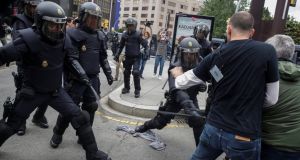 Spanish police scuffle with people outside a polling station for the banned independence referendum in Tarragona, Spain. Photograph: David Gonzalez/Reuters 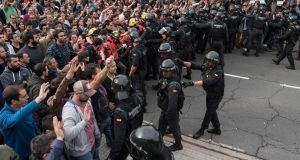 Police move back to their vans followed by members of the public after storming into polling station to confiscate ballot boxes in Sant Julia de Ramis, Spain. Photograph: David Ramos/Getty Images 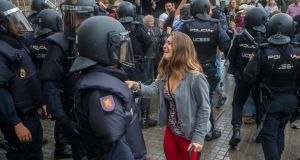 A woman addresses an officer of National Police outside a polling centre at Can Vilumara Secondary School in L’Hospitalet Llobregat, Barcelona. Photograph: Quique Garcia/EPA 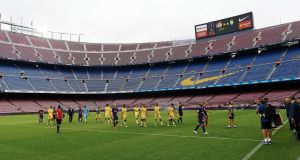 Catalonia’s referendum on independence from Spain was marred by violence on Sunday, as the central government deployed riot police to prevent voting from taking place across the region.

The police wielded batons and fired rubber bullets as they attempted to remove people from voting stations, leaving more than 800 injured, according to the Catalan government.

The Catalan government said on Sunday night that about 2.26 million people had cast a ballot in the referendum and 90 per cent of them had voted in favour of secession.

This represents a turnout of about 42.3 per cent of Catalonia’s 5.34 million voters.

With the Spanish government deeming the referendum illegal, the Catalan police had been given orders to secure the more than 2,000 schools and other public buildings due to be used for the vote.

Many Catalans had therefore occupied their voting stations on Saturday night, or gathered outside early on Sunday morning, in order to prevent the police from closing them down.

The day began relatively smoothly for organisers, with the Catalan police, or Mossos d’Esquadra allowing voting to go ahead.

The question put to Catalans was: “Do you want Catalonia to become an independent state in the form of a republic?”

However, by mid-morning, Spanish civil guards and national police had been deployed to several schools and started forcibly removing people, in many cases striking them with batons, as well as smashing windows and seizing ballot boxes from inside.

One man was injured in the eye by a rubber bullet fired by police. The Spanish government said that 11 police officers were injured.

Catalan regional premier Carles Puigdemont condemned what he described as the Spanish state’s “irresponsible” tactics. “In the face of such unjustified violence – the batons, the rubber bullets – [there are] ballots, voting slips and voting stations,” he said, adding: The image the [Spanish] state has given to the outside world has reached heights of shame that will accompany it forever.” However, the Spanish government dismissed the referendum as a failure.

“The majority of Catalans have ignored the event without fuss – I thank them for their civic-mindedness,” prime minister Mariano Rajoy said in the evening, appraising the day.

He described the referendum project as “the worst kind of populism.” Mr Rajoy’s government also defended the performance of the police. “They have complied with the orders of justice, they have acted with professionalism and in a proportionate way they have always sought to protect rights and liberties,” said deputy prime minister Soraya Sáenz de Santamaría.

Farmers had positioned tractors on roads and in front of some voting station entrances. Meanwhile, firefighters acted as shields between voters and police. In one incident, firefighters nearly came to blows with police.

Beforehand, the Catalan government had said that a victory for the Yes vote would see the region’s parliament issue a declaration of independence within 48 hours of results being confirmed.

With the legal and logistical framework of the vote severely undermined by the Spanish state, many believe it will be hard for the referendum to be deemed binding. Nonetheless, Sunday’s clashes appear likely to entrench both sides further and fuel Catalan separatist feeling. Pressure will now be on Mr Rajoy to seek a way out of the stalemate, which has thrown Spain into its deepest political crisis for decades.

Several politicians called for his resignation on Sunday, including Barcelona mayor Ada Colau and Podemos leader Pablo Iglesias. Demonstrations took place in several cities across Spain calling for him to step down.

In his statement on Sunday, Mr Rajoy hinted at a possible change of tack, saying it was time to reflect and that he would appear before congress to explain the government’s attempts to stop the referendum.

A football game between Barcelona and Las Palmas in the Catalan team’s Camp Nou stadium was played behind closed doors due to concerns about possible unrest among supporters. Barcelona defender Gerard Piqué, an outspoken supporter of Catalan independence, said it had been the “worst day” of his career, due to the violence.

“This was the worst decision by Spain in the last 40 to 50 years and it will have consequences,” he said.

Mick Barry, Solidarity TD for Cork North Central, was an international parliamentary visitor and he observed events from several towns across the Catalan region. “It’s the most savage repression seen in a generation, since the Franco era,” he told The Irish Times. He called for a louder condemnation of the Spanish government from European governments. “This is violent suppression of democratic rights,” he said.