Irish nurse Eanna O’Cochlain, 57, from Cork, who is facing 12 years prison in the Philippines for a minor cannabis possession charge he denies, is appealing to the Irish public and government to help him. 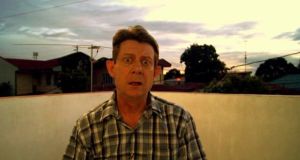 Eanna O’Cochlain, a nurse from Cork, was arrested in Laoag International Airport in the Philippines in July 2013.

The Government has asked the Filipino authorities to expedite the court case of an Irish man facing 12 years in jail for possession of a small amount of cannabis.

Eanna O’Cochlain, a nurse from Cork, was arrested in Laoag International Airport in the Philippines in July 2013 when he was visiting the country with his Filipina wife. Security staff claimed they found about .38 grams of cannabis in his cigarette box.

Mr O’Cochlain (57) says it was planted there in attempt to extort money from him and that he was arrested when he refused to pay. He was later sentenced to 12 years in prison but was released on bail pending appeal.

The appeal court upheld the sentence and he is now taking his case to the Supreme Court, a process that he believes could take years.

Mr O’Cochlain is currently in hiding as he awaits his court date as he fears he could be targeted by anti-drug vigilantes who have killed thousands in the country since its president, Rodrigo Duterte, effectively sanctioned the extra-judicial murder of drug dealers.

Minister for Foreign Affairs Simon Coveney wrote to Mr O’Cochlain on Friday outlining the diplomatic efforts being undertaken on his behalf but warned that the Government was “limited” in what it could do.

A spokesman for the Department of Foreign Affairs said it cannot interfere in another country’s court process “just as no foreign government can interfere in our judicial system”.

He added: “Also, we cannot provide legal advice or act on any citizen’s behalf in legal proceedings. The handling of Mr O’Cochlain’s defence in court or the management of his appeal arguments are matters for him and his legal representatives.”

Mr Coveney told Mr O’Cochlain that he pressed his case with the Filipino foreign minister at the UN in New York earlier this month.

“I asked for the minister’s assistance in bringing this matter to a speedy resolution. We had a good conversation and he has agreed to follow up.”

Mr Coveney said he has also asked Ireland’s ambassador to the Philippines, Geoffrey Keating, to lobby for the speedy progression of the case on the grounds that Mr O’Cochlain is in poor health.

The department said the administrator of the Supreme Court has acknowledged the concerns of the Irish Government. A spokesman said that Mr O’Cochlain’s attorneys “believe they have made a good case to argue that there is reasonable doubt in relation to his conviction”.

Court orders South Africa to amend its coronavirus lockdown regulations 15:52
Johnson defends coronavirus response as UK’s death toll passes 50,000 14:00
Khartoum massacre a year on: ‘If I told them I was a doctor I wouldn’t be talking now’ 13:44
Coronavirus: UK deaths surpass 50,000 as Italians allowed travel to other regions 13:15
Mumbai escapes brunt of cyclone after winds change direction 12:55

1 Black Lives Matter protest planned for Dublin is cancelled
2 With Lincoln looking on, the crowd dropped to their knees as 7pm approached
3 Luke ‘Ming’ Flanagan bares his bottom half to European Parliament
4 Covid-19: Harris urges people not to think it’s ‘mission accomplished’ ahead of next phase
5 Trinity College Dublin to resume with as much face-to-face teaching as possible
Real news has value SUBSCRIBE