‘I’ve never seen the US so divided’: Voters voice fears as midterms get under way

US president Donald Trump condemns the threat of political violence and urges the media to end its “hostility” at a rally in Wisconsin, hours after authorities intercepted bombs sent to news network CNN and prominent Democrats. 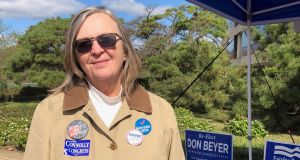 Laurie Macpherson, Democratic volunteer at a Democrat tent outside a voting centre in Fairfax.

The US midterm elections may be 11 days away but in many parts of the country, voters are already casting their ballot in what promises to be one of the most closely watched elections in recent times.

At Fairfax County Government Center in Virginia shortly after midday, a small but steady stream of residents are lining up to vote.

Virginia is one of many states across the US where voting has begun. Technically the state operates an “absentee voting” system whereby residents who will not be available on November 6th can vote early, as long as they meet one of 20 conditions.

As election registrar Gary Scott explains: “It’s pretty rare not to find one of the reasons that would not fit you.” Among those who qualify to vote early are college students, military personnel, carers and pregnant women. People who will be out of the state on election day for any reason can qualify, as do those who have a long commute or work more than 11 hours a day.

Fairfax is one of the most populous areas in the state of Virginia. As in other regions, voters are being asked to decide on multiple issues. This includes the Senate race between Tim Kaine, Hillary Clinton’s running mate in 2016, and Corey Stewart, a controversial right-wing Republican, as well as several congressional seats and a number of changes to the state constitution.

Inside a small conference room in the modern office complex, the voting process is in full swing.

According to Scott, 35,000 people have already voted in Fairfax county – out of the more than 750,000 voters on the election register. In addition, more than 30,000 postal ballots have been sent out to constituents. “If you do vote by mail, the ballot must be returned by 7pm on election day on November 6th,” he says, noting that getting ballots back on time can be an issue.

Outside the centre, distinctive blue and red campaign posters flutter in the breeze. The local Republican and Democrat parties have erected tents that provide voters with information and campaign material as they enter the building. Political parties must remain at least 12m from the entrance to the voting centre, though officials from both parties are permitted to send in representatives on election day.

Laurie Macpherson is a local Democrat volunteer who is manning the blue tent, talking to prospective voters as they enter the building to cast their vote. She says voting has been brisk since absentee voting began on September 21st.

“I think that undoubtedly people are more energised this year,” she says, and though she is confident about Democrats’ prospects, she says it is difficult to gauge how people will vote.

Dave, a biological scientist, is among those who are voting early, as he will be away on election day. He’s a lifelong Democrat. “I’ve always voted Democrat, but this year it seems more important than ever. Trump and his policies – it’s just insane.” But he is cautious about the party’s hopes in this year’s midterms. “I think that Trump has managed to rile up his base and increase his support in some areas remarkably,” he says. Nonetheless it is difficult to predict how the election will pan out, he says.

“It has become so divisive in this country that people don’t talk about politics, about how they’re going to vote, except within their immediate group. I’ve never seen the country so divided,” he says.

A few minutes later, Eida Deganno approaches the voting centre. An immigrant from Cuba, she moved to the US in the early 1960s after Fidel Castro took power. She’s here to vote Republican. “I’m what you call a free-market Republican,” she says. What about Donald Trump? “He’s a bit off the wall but I like what he’s doing, particularly on immigration.”

She says she does not believe that people who enter the country illegally should be admitted. “I am someone who came here legally, and I don’t think it’s fair that people can come here any way they like, that they can just walk across the border into a country, into any country,” she says, referring to the caravan of migrants making its way towards the US-Mexico border through Central America.

Nationwide, millions of people have already cast their votes and the numbers of early voters are much higher than in recent midterm elections. But experts are divided on the impact of early voting on the election outcome.

In Maine, for example, Democrats are ahead of Republicans in requesting and submitting absentee ballots. But previous elections suggest this does not necessarily serve as an election bellwether. In 2016 Maine’s second congressional district voted Republican despite Democrats outpacing their rivals in early voting.

Early indications suggest Republicans may be ahead in terms of votes cast, reflecting in part the fact that those who use postal votes tend to be older and vote Republican. Younger voters tend to vote later, which often benefits Democrats.

While some areas have reported a significant increase in early voting, this may reflect the fact that early voting has become increasingly popular in recent years, rather than a specific reaction to the current political climate.

In Virginia, Gary Scott says that voting is higher at this point in the cycle than in other years – twice as many people have now voted at this stage in the election cycle compared to last year’s Virginia governor race. However, numbers are still slightly lower than in the presidential election.

What is clear is that a true picture of the new electoral map will really emerge only when voting closes at 7pm on November 6th and Scott and his team begin the count and the first exit polls are announced.